I mentioned in my last Post that the recent strong winds had blown down our ivy covered arch into the back garden.
Both Graham and I were fond of the arch, as a gateway into the garden and we did hope that it might be possible to simply stand it up again and prop it in place.
But when Graham looked at it, he decided it was a dead parrot.
It was actually a tubular metal arch, which we had strengthened with a wooden structure around it (or maybe vice versa, we did it soooooo long ago that its origins are lost in the mists of memory).
Anyway, the metal stuff was both rusty, terminally bent and broken. And the wood was so rotted that it was possible just to push a finger into it.
So there was nothing for it but a clear out and re-think.
We thought we might be able to simply burn the ivy to get rid of it, but when Graham had got it all into a pile, we realised just how much of it there is! 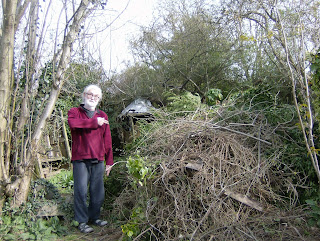 So we may have to have a series of small bonfires, rather than risk incinerating the neighbourhood.
In the meantime Graham had an idea for a new arch. We have two prolific hazel trees in the garden which throw up long straight coppiced poles, and he had been 'trimming' one of these a couple of weeks ago, so he found the six longest poles which he could tie together in pairs to make 'A' frames. In the style of the old cottages, he used another pole to tie across the tops of the three 'A' frames, like a ridge pole and made a more tunnel like structure. He then decided to use more of the thinner hazel branches to weave between the uprights of his structure.
Graham was worried that the finished .... pergola(?) is not actually straight, but has a bend in it. But I really like it. 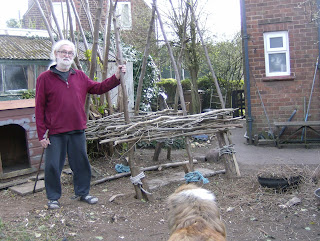 He has also been having a look round the garden for hazel saplings (they come up all over the place) and has planted a lot of them at either side of the 'arch'. As they grow, he hopes to train them and weave them together and round the arch, to create a living archway.
We would also like to get some honeysuckle to grow up it too - no doubt the ivy will also be making a reappearance.


Posted by Christine Sempers at 06:47