I found a really fab looking, huge and intricate square to crochet.
The pattern is called Sophie's Universe from LookatwhatImade.
I didn't stick to the colours specified, and used what I had and really enjoyed making it - although I know I made a few mistakes, but I am still chuffed with it.
The only problem was: what was I going to do with this piece of crochet?
The obvious use was as a cover for a large cushion. And that solution meant that I could do it again as I would have to have another square for the other side.
But while I was contemplating it, Graham held it up for me to have a good look at. It is a different thing when you have been looking very closely at the intricate detail of something you are making and then to see the whole thing.
And when Graham held it up in front of himself, I said jokingly, 'You know, that could be the front of a jumper. I could make another square for the back and one each for the arms!'
Graham turned round to look at the effect in the mirror over the fireplace and said thoughtfully, 'Oh yes!' then demanded that I make it for him!
I thought 'Why not!' and decided to have a go.
Obviously the first thing I needed to do was make another three Sophie's Universe squares, and whereas it didn't matter too much if the front and back colour ways were slightly different, the two arms needed to look the same.
This was going to take some crocheting, but I was up for it!
Three squares later, I then had to figure out how to fasten the pieces together into a single garment.
I started by making four small triangles and two oblong pieces which I used to form a yoke to fasten the front and back together, then I had a look at the sides and as Graham likes a floppy jumper rather than a tight one I need to add a few inches in at the sides.
This was actually easier than I'd thought as I simply crocheted rows of double crochet and back post double crochets, to make ribbing, straight onto the sides of the front squares. I had crocheted the arm squares into tubes and safety pinned them in place again so that I made the sides the correct length and width to join directly onto the underneath seam of the arm.
When the side panels were the right size I simply crocheted the front to the back and continued around the arm hole to crochet the several pieces into one.
I don't know how long it took me to make the finished garment, something like two to four weeks, I think. But I was really chuffed with the results. 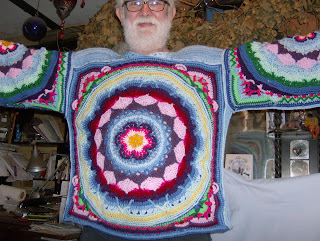 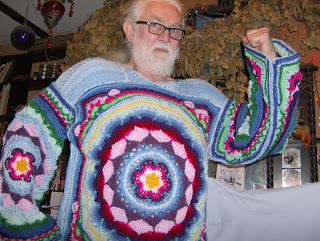 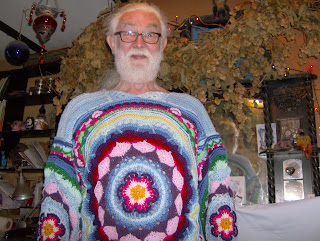 Graham says he likes the jumper, it is lovely and warm - but whether he will ever actually dare to wear it out in public, that is a different matter.
Incidentally I don't think I managed to make any of the panels completely correct to the pattern, but I am still chuffed with the results.

Posted by Christine Sempers at 04:41