Do you remember? Back in the Spring, just before the Covid Lockdown, the high winds brought down our ivy-covered arch into the back garden?

Graham cleared away the debris into a HUGE pile at the back of the garden. This was substantially added to when he 'trimmed' the leylandii hedge (lopped six feet off it and reduced it to chest height). 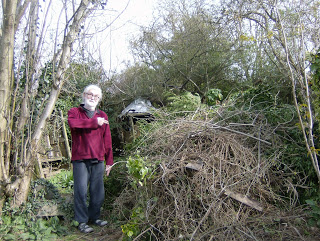 Well this now VAST pile of twigs and sticks and logs has sat in the garden all Summer.

Occasionally Graham has taken the brown bin (garden waste) and filled it with clippings from the heap, making apparently no difference to the volume.

Until the other day when he said to me: 'What do you think to getting a garden incinerator? Aldi's have some in at £15.00.'

I said 'If you want to buy one, go ahead.' while thinking to myself that if he was thinking of feeding the Heap into it, that would take some doing.

Now one of his objections to having a bonfire was that the Heap was currently positioned over what had been our fire pit, so in order to have a controlled and safe bonfire, he would have to move the Heap, then feed it into the bonfire gradually.

Also we know that wild life will have made homes in the Heap, so it would need dis-mantling and moving, to be sure that none of our garden inhabitants came a cropper.

I said nothing. Then Graham said, 'Or I could just have a bonfire.'

So yesterday afternoon the Heap was shifted. Larger pieces of wood were separated and the fire pit was exposed. As expected, several frogs/toads had made homes under the Heap and these had to be shooed away. One was a magnificent large frog with a prodigious leap. Anyway all was prepared ready for dusk.

And at 7 pm Graham announced that he was going to start the bonfire, 'I'll come out with you.' I said.

'Just to be sure we have stuff put on gradually and not all in one big chunk.' I said.

Actually it all went very well. Graham was careful as he had seen that at least one of the frogs/toads had moved into the Heap again, so he took stuff off the pile carefully, making sure he wasn't transferring any creatures into the fire.

The Heap was lovely and dry/seasoned, so it burnt well, but even so it still took over an hour to gradually feed all of it into the bonfire. But it all burnt down well.

After the last lot was on, we sat and watched it for a while, making sure it was burnt down to a glowing grumble before we left it.

It is a long time since we last had a bonfire. To me they are always magical, as we always have tried to have a little fire to celebrate the festivals. This year we have kept largely to candles, so it was lovely to sit and watch the dancing and leaping flames.

These are the fires that our ancestors had. That burnt up the waste at the end of the harvest.

this was the time when fields would be alight with burning stubble, burning up the disease and fertilising the Earth with fresh ash. These were the fires we would see at night, up on the hill sides, visible for miles. As the bonfires and Need Fires would also be visible in those dark, dark nights or the far past, when the only light you could bring into darkness was fire. 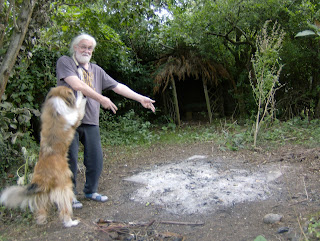 The next day - this is all that was left.

Posted by Christine Sempers at 03:17 No comments:

I love the progression of the seasons through the year.

They remind us that nothing stays the same, everything constantly changes and moves on. But also they remind us of seasons past and seasons yet to come.

It is only a couple of weeks since we were sweltering in Summer heat. Every morning I would look forward to opening the back door, and leaving it open, to encourage as much as possible of the cool, fresh air to flood into the house. They yesterday when I opened the door, there was a distinct nip in the air. And after the door had been open only a few minutes, suddenly 'the factory' struck up into full production. The 'factory' is our central heating boiler, which has been silent for months, but that morning with a whoosh and a vrrrrrm suddenly it was heating water and, for the first time since late Spring, the radiators were beginning to warm up.

It is true that the leaves on the trees are starting to curl up and change colour around the edges. Growth has slowed in the garden, but the hedgerow fruits are starting to ripen. It looks like a good year for rosehips, and the cotoneasters in the garden are popping out hundreds of little red berries. I shall ask Graham to look out for brambles when he takes the dogs for a walk

When I was very little, this is when my dad would call for me to go for a very early morning walk with him. We would set off when it was barely light and walk around the edges of the stubble in the newly harvested fields. The mist would be rising, and the air soft and cool enough to make you want to keep moving, and soon we would come to the field where the mushrooms grew.

We searched through the meadow, avoiding the cows which were following their own daily routine, wandering slowly and grazing the moist, thick grass at the far side of the field. Dad showed me how to look for tufts of grass, where the mushrooms hid at their base, and to look out for the darker green circles of the fairy rings, so many in this field that they intersected. Some were small, only just big enough to sit inside, others were huge, obviously grown over many years, and following around the edges of the rings was where the white capped mushrooms grew.

When we had picked enough for breakfast, we would meander home, but sometimes we would go the long way, over the fields away from the houses, until we got to Uncle Bill and Aunty Laura's house. Dad might leave a paper bag of mushrooms by their back doorstep, so they would find them when they opened the door.

Then home at last to have mushrooms cooked in my dad's special way: fried in butter, then a blob of Marmite, and a splash of strong tea (tea leaves and all), to make a flavoursome liquor which we would eat with bread and butter.

Posted by Christine Sempers at 02:20 No comments: