You know the trouble with shifting stuff in the house? You know, like when you have been having central heating installed?
Well the trouble is when you shift stuff from the pile in which it has accumulated over several years and put it somewhere else, THAT is when you actually look at it and think to yourself, 'Ye gods, that is a heck of a lot of stuff!'
And you also think to yourself, that maybe if that pile has been there for several years, maybe we could ...... get rid of it....
Now, that is a radical thought.
So we filled the wheelie bin for recycling, and we filled the wheelie bin for 'general household' stuff. And there was still a huge pile of stuff that had to go somewhere.
And because we now have radiators on many walls in the house (well six) that means there is less wall space to shove stuff up against.
Actually we did apologise to the plumbers for the amount of stuff they were having to manouver around and they said, 'Oh this is nothing!' and they told us of one place they had recently been to where you could only walk down passageways between piles of stuff just wide enough for one person to get through. This did make me feel a bit better.
But still, I have got the 'throwing stuff away' bug and now I want to THROW STUFF AWAY!
So yesterday Graham and I got all of my jigsaw puzzles together.
Not a big job, you would think.
But before I got into crochet, I did jigsaw puzzles. LOTS of jigsaw puzzles.
So we got all of the jigsaw puzzles and went through them all, just picking out the ones I really like and throwing away the ones that were huge, mainly brown, very difficult, or I just was not too keen on. We kept about ten jigsaws - well maybe a few more than ten.
Then we looked at the pile we had put for getting rid of, and counted them up.
There were over sixty!
And now those sixty puzzles which were going out, were creating another huge pile in the living room. So we girded our loins and went off to the dump with a car so packed with jigsaw puzzles that Graham had to have a pile of them on his lap.
When we got to the dump and Graham headed for the 'cardboard only' skip with the first lot, he met a chap who asked if any of the puzzles had trains on.
You want puzzles with trains? Sure here have this one, and how about this one. Oh and that one over there.
The elderly chap went away bemused and taking stuff away from the dump when he had come to get rid of stuff - he was really chuffed and kept thanking us.
We came home over sixty puzzles lighter, and thought:
What can we throw away next? 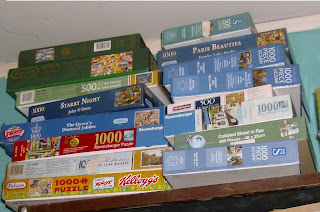 Posted by Christine Sempers at 00:53