It doesn't get any easier.

Today we have had to take our beautiful Wicani China Doll on her final visit to the vet. China was thirteen and a half, a very elderly lady in collie terms, and suddenly over the past few days she started to leave us.
Yesterday she went on her usual morning walk with Graham and Bridie (our other collie), even if it was a slow walk, but she had eaten little on Saturday, and she ate nothing and drank little on Sunday. And after coming home from her walk, moved very little, and during the day became doubly incontinent.
Her body had decided it was time to shut down, and so we had to take that final little journey together.
The pain of losing a loved companion never diminishes, but that is the price we pay for having that love over the years.
That and a felt covered house.
Every dog we have had, is always different, always has their own personality. No two are ever the same no matter how much alike they look. All dogs are individuals in the same way that humans are.
No dog will ever be as intelligent as Lupin, our first collie.
No dog will ever be as loving as Raven, who wrapped herself around you.
No dog will ever have such powerful body odour as Snag, our Yorkshire terrier.
No dog will be as missed as Maeve who loved to be in contact with me at all times.
No dog will ever be as fluffy as China! Or as beautiful, or make you feel so privileged to be having a cuddle with her.
And no dog will ever have such big feet as Bridie! 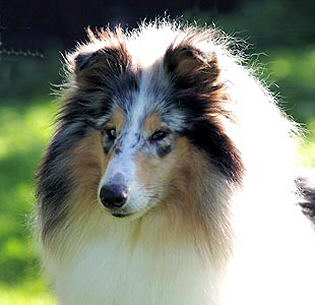 China
Go safely through the field of reeds
With Anubis by your side
Enjoy chasing over the Elysian Fields
And meeting friends who have gone before.
Know that you are loved, and always will be.

Let There Be Rain!

I have just been sitting in our front hall, with the door wide open watching it rain.
This does sound strange, even to me. But this is the first decent rain we have had for the best part of two months.
We have had a couple of little sprinkles over the past couple of weeks, but not enough to wet the ground properly. We had a brief shower three weeks ago, which was just enough to revive the grass, and when it got the chance, it certainly made on (as they say in these parts).
We have been watching the weather forecast, and watching the weather radar, to try and see if any of the rain other parts of the country have had, would make it to us.
Torrential rain has passed above us and below us, or tipped itself all over the west of the Pennines and left none to roll over to the east. But today, we have proper rain (yay!).
And not only rain, but thunder and lightning too!
So I decided to enjoy this novelty, and positioned my desk chair by the open door, and just enjoyed watching it tipping it down.
Bliss!
Posted by Christine Sempers at 06:24 No comments:

Of Fly Paper and Shaving Foam

As it continues hot and dry, we have had an influx of flies.
We have dealt with this in two ways:
First we have invested in some old-fashioned fly-papers. Now I haven't seen these for years. In fact, I didn't know anyone still made them, but Graham came home with some from the shops and we have been amazed at how effective they are (and how many flies we have caught with them). Also as they contain no chemicals, just sticky stuff, they are environmentally friendly and we don't have to worry about any fumes/chemical affecting dogs or humans.
Secondly I have been using some of the Citronella Room Spray that we sell, as Citronella is a natural fly repellent.
Now, my eyesight isn't as sharp as it was when I was younger, and spotting the squirty hole proved dangerous. Yes, I did squirt myself in the chest. But I take comfort from the thought that I am also now fly repellent!

It also reminded me of the Christmas when my dad was first given a can of squirty shaving foam.
Now, back in the 1970's this was a new thing to us in the countryside, so my mum thought this was a very special gift to give to my dad (and relatively expensive, compared to the shaving soap he usually used).
My dad couldn't wait to try this out, and hurried off to the bathroom to give it a go.
We only had a small bathroom, well shower room really, but there were mirrors on opposite walls, to make it feel larger.
Anyway after some time my dad stormed out of the bathroom and emphatically dumped the can of shaving foam in the rubbish bin.
'That was a load of rubbish!' he fumed, 'I shook the thing and squirted and squirted and NOTHING came out!'
We were all a bit dumbfounded, and my mum was rather surprised by the outcome.
A couple of minutes later, while my dad was still harumphing and reading the newspaper with much angry shaking of the pages in front of him, mum popped her head round the living room door and silently beckoned me to go with her. She pointed to the open bathroom door so I went in to see what the matter was, and there, high up on the bathroom walls was a frothy mass of shaving foam. In fact not just in one place, but all around the bathroom, high up on the walls, and even on the ceiling.
Dad had obviously been holding the can the wrong way round, and it had squirted with such force that it had shot out and plastered the bathroom above his line of sight.

Posted by Christine Sempers at 06:27 No comments: