A Dog and a Half

Well, having Bridie has certainly enlivened China!
In fact we are all getting more exercise than we expected.
This is no fault of Bridie, she is just a very energetic, inquisitive and interested dog. She is also a lot bigger than China.
Bridie is the result of the incorporation of American collie genes into British breeding stock. The British rough collie has been getting gradually smaller over the years, to the extent that we have been asked if China is a Sheltie, the Shetland Sheepdog. Angela (Wicani Collies) took the radical (apparently) step of bringing a large male Texan collie into her breeding programme, with the main aim of breeding out certain genetic defects which can lead to health problems for collies.
Unfortunately these days,there are some nasty inherited genetic defects to some dog breeds, to such an extent that those who tend to win the 'best in breed' at dog shows may also exhibit some of the most grotesque of these defects. We all know that the 'flat faced' dogs have breathing problems, so why not breed their noses back in again? Some dog breeds have back or hip problems, others have heart or even brain problems, the results of the skeleton, rib cage or skull being bred into a specific shape or size.
Angela has now succeeded in breeding out the genetic defect, a collie eye problem, from the dogs in her kennels. However it is amazing the pure hatred she has been subjected to - including death threats! And all because she has wanted to truly improve her dogs not only in looks, but in their health too.
Bridie stands head and shoulders taller than China, and I mean that literally. We have never had a dog who could just stand and look at what might be happening on our dining table, usually the collies can reach to run their noses around the edge of the table. She is also a lot more solid, strong and energetic dog. China seems to find this quite stimulating and trots quite happily after Bridie, and is having to keep looking to see what Bridie is doing, as Bridie is moving elegantly from room to room and in and out of the garden. However Bridie does tend to lean on China, she likes to lean on me too, and you certainly know when you are being leant on!
Graham took both dogs out for a walk for the first time on Monday, and arrived home ten minutes earlier than usual, simply because Bridie naturally walks more quickly than China. He said he was also sure that his left arm was now longer than his right as Bridie tried to go in all directions at once and sniff everything thoroughly too.
Normally Graham doesn't bother with a lead, once the dogs are across the main road, and into the fields and woodland, but as this was Bridie's first walk in a strange area, she was on a lead. We need to make sure firstly that she will come back when called, and that she knows the route so can find her way home if she gets lost. 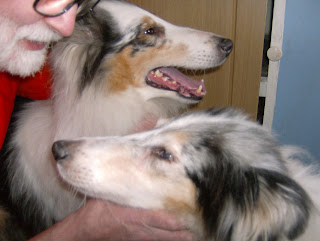 So far she seems to be settling in amazingly well, considering that she is seven years old. She has quickly learnt how to use the stairs. In fact once she found out how to get up, and then down again, this became a game that kept her interested for some time, either thundering up and down at top speed, or wandering up, then down gently, then thundering back up again.
We just need to teach her how to use the dog flap next.

Bridie is at the back of the photo and China  at the front. The nose in the middle belongs to Graham.

Posted by Christine Sempers at 05:24 No comments:

Last night we were playing WoW (World of Warcraft), as we do, when we saw our son Mike (Thog) had come online. He doesn't normally play this game, but the app has an instant messaging service which is very handy.
'Hiya,' he said 'Just had a message from Angela asking if you would be interested in taking on one of her dogs.'
Angela is our friend from Wicani Collies, who has the most beautiful dogs, and who has been letting us home some of hers for quite a number of years now.
So there we had the weekend planned: Saturday morning I would create and print the customer labels, then we could have a fold and stuffing weekend. I've been writing the Newsletter and printing all week ready for the next Mail Shot.
Damn just noticed I started a paragraph with the dreaded 'so' - I hate being fashionable.
So anyway, the instance response was 'Yes, of course, I have petrol in the car, when can we come?' while thinking the proverbial 'Does a bear sh*t in the woods?'

Which was why this morning instead of folding and stuffing, we were on our way to Driffield and beyond to visit Angela and Keith and possibly (who am I kidding) bring home another beautiful girl to keep China company.
It was lovely to see Angela and Keith again. It is a few years since we all met up. Mike and Graham had popped in last year on their way to their boys weekend in Robin Hood's Bay. So we had a good catch up, and talked mainly about dogs.
And now are a two dog family again, with the addition of Wicani White Lace and Promises, or Bridie to her friends 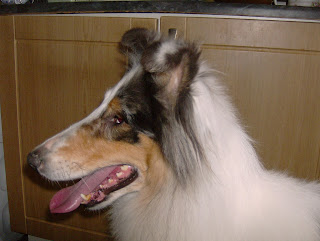 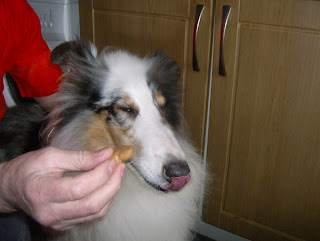 I am sure Bridie is saying in the bottom photo 'If you think one of those will make me pose for a photo, you have another think coming.'

Yesterday we had a fab morning out.
It was the first Sunday of the month, so the Humber Bridge Farmer's Market was on.
There are some things we always buy from here.
I like the home grown tomatoes, the Lincolnshire butcher with her dripping, pork pies and half a sponge cake(s). I treat myself to a Blood Tonic Cordial too, which is made from raspberries and nettles and has a completely unique and yummy flavour.
And our big treat is some curry from a Pakistani lady, who also makes enormous flat breads and onion bajis the size of your head. Delicious.
But today also Walkington Car Boot Sale was on. Normally Graham has to go round this one on his own, while I wait in the car, as it is held on the local playing field, and the hard tyres of my wheel chair just sink straight in, making pushing impossible, if the ground is at all moist. However we have had a couple of weeks without much rain, so this time Graham decided we were going to give me and the wheelchair an outing.
So a huge treat (I loooove Boot Sales)! And one I intended making the most of. I had raided my change jug, where I collect coins that are stuffing my purse. And of course we have to use up the old £1 coins as they will cease to be legal tender in October.
So I was heavily laden with money to spend.
It is amazing how one person's rubbish is another person's treasure. And Car Boot Sales are a great example of re-cycling, which is only to be encouraged!
To give you some idea of how well we did, Graham had to park me three times to go back to the car and unload our bags of booty.
So what did we get?
Lots of books: reading books for me and a pile of erotic titles which might make it to a future Book Sale list (although I will have to pry them off Graham first). Including a small hardbacked ex-library book Harris's List of Covent-Garden Ladies, which was a seventeenth century catalogue of the available ladies of pleasure with a review of their charms and specialities eg
Mrs Str- No 88 Queen Ann Street East
This lady keeps the house, is a fat plump lass, about twenty-four years of age, and is at present in keeping with a country parson, who is seldom in town.
Much experience and a natural propensity to the business, has rendered this lady a perfect mistress in the science she professes; and not withstanding her great practise, she is not the least tired of it, but pursues it with as much eagerness as at first, though her long study has somewhat impaired her complexion, which she endeavours to disguise, by the assistance of art.

There were also some jigsaws which have been put away as xmas pressies for me, a HUGE knitted blanket - the stall holder said she decided to knit it last winter, to use up her wool, and it kept her warm while she was knitting it. A small and beautiful porcelain Japanese Lucky Cat. 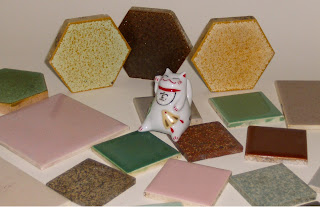 But the piece-de-resistance, and incidentally the last and heaviest purchase, is or are, five large square plastic tubs full of 1950's ceramic tile samples.
As soon as I saw them I knew I must be able to do something with them.
None are full sized tiles, they are all miniatures, mainly square, but also oblong and some hexagonal ones too. All in 1950's shades, mainly pale or mottled colours.
I have an idea for all sorts of things from pentacles and Green Man faces, to spells or charms for happiness, wealth or Good Luck.
The Lady we brought them from was chuffed that someone could see their potential.
And I am looking forward to having a play with them.

Incidentally the little cat is 40mm tall to give you an idea of scale in the photo
Posted by Christine Sempers at 03:39 No comments: