Happy Winter Celebration of Your Choice!

At this time of year when everyone is wishing each other 'Happy Christmas!' we sometimes get friends and relatives unsure what to say to Graham and me: 'Happy Yule'?, 'Happy Solstice'? or as I am a proud and long-standing player of World of Warcraft, 'Happy Winterveil'?

To be honest I am happy to respond to any of these (and more) because it is the sentiment behind these greetings which is what everyone is trying to express:
'Be Happy!' they are saying, 'Have fun, Enjoy yourself!'.
And that is what every religion has been expressing around this time.

Frankly one of the things I love about being a Pagan and Witch is that I can celebrate EVERYTHING!

Pagans have always been inclusive of all deities and philosophies, and you find this inclusiveness from ancient Rome and Egypt to Scandinavia and to modern Pagans too.

You want to celebrate a festival? That looks like fun, so we'll do it too!
Adding another deity and celebration to the calendar is no hardship what so ever.

And at certain times of the year you will see that many religions all recognise a special time and want to express it in their own way.

This is why our modern 'Christmas' is such a conglomeration of traditions and beliefs. We have influences in there from many different religions, from folklore and legends, and traditions so old and so apparently universal that their origins are lost in the vastness of pre-history.

So don't worry about offending me by wishing me a 'Merry Christmas' - you won't, and I will.

And may the Gods bless us, every one.

Posted by Christine Sempers at 23:55 No comments:

In 17th century Britain after the revolution, when Cromwell and the puritans came to power, Christmas and all its festivities were banned as Pagan and Heathen and nothing to do with christianity.

And he was so right.

Just about all the stories and traditions associated with Christmas and the birth of Christ are pinched from older religions, traditions and beliefs - or are downright fiction (lies).
For a start no one knows when and where Jesus was born. The story of the Roman census and the Holy Family having to travel to Bethlehem is a complete fiction. It was devised simply to make it appear that the birth of Jesus fulfilled a prophesy by Isiah.
The date of Christmas, the 25th of December, and many of the details surrounding the birth, such as being born in a stable (cave) between the ox and the ass, and the cry 'The bridegroom cometh!' were all lifted straight from the myths of Mithras, the chief rival religion to christianity in early Rome. Some scholars argue that it was sheer fluke that christianity was chosen as the state religion of Rome rather than Mithraism.
Decorating the home with evergreens around the Winter Solstice was another tradition that goes back to ancient Rome and the fun and games of Saturnalia. As does the tradition of masters and servants swapping positions - still seen to a lesser extent in the modern office christmas party.

So let us have a look at the character and attributes of the mysterious Gift Bringer.

For a start - why mysterious?

Part of the magic of the Gift Bringer is that they are not seen to be giving the gifts. They give anonymously, the only sign that they have been are the gifts they leave.
St Nicholas hid outside the house and threw money either through an open window, or down the chimney. By good luck (or magic) these coin bags fell either into the shoes or stockings of the young women they were intended for. Father Christmas also enters the house down the chimney and leaves gifts in socks and stockings.
I remember as a child asking how Father Christmas could get into houses which had no chimney. But his magical nature means that despite his apparent size he can enter homes even through the smallest keyhole.
St Nicholas travels on his white horse, while Father Christmas and Santa Claus have a sleigh pulled by reindeer. Many of the ancient gods have chariots or mounts which fly across the sky, from Ra in his boat to Apollo, Athene and of course Freya in her chariot drawn by cats, and Odin on his eight legged horse Sleipnir.

Another of the attributes of the Gift Bringer is that magically they know exactly what gifts to bring. Almost as if they know the receiver intimately.
Over the last 100 years or so, it has become popular for children to write letters to Father Christmas telling him exactly what they would like to receive (letters read with great interest by their parents). These letters are merely a modern manifestation of an ancient tradition: petitioning a deity, saint or spirit for special help or wishes.

The Shaman is one who can pass between the worlds of men and spirits carrying messages and bringing back gifts. Odin hung as dead for three days on the world tree and returned to life bringing the gift of the knowledge of the runes. He was known also to journey vast distances in the spirit world in the blink of an eye, while appearing to sleep as if dead.

The reindeer are a creature of the cold northern lands used for transport and to pull sleighs for thousands of years. Why should Father Christmas use reindeer, a creature which has been extinct in the British Isles since before the Romans came? The roots of this attribute certainly go back into the mists of our Pagan ancestors beliefs.
The white horse of St Nicholas echoes the mount of Odin, his grey Sleipnir, swifter than any other mount and able to ride through thick and thin, between the worlds and through the Winter sky, calling the Wild Hunt to follow (the Wild Hunt also rides the night sky around the Solstice).

The green of his coat is the colour of evergreen plants, reminding the world that life continues and the world will bloom again. He wears fur because it is practical in the cold north and he is a hunter and shaman who has respect for the spirits of the animals killed.

He brings gifts which appear magically, and is never seen because he is in spirit form.

He is the servant of the community, doing their work as he passes between the worlds, through matter and spirit, down chimneys and through key holes.

Bringing fun and merriment:
And a Merry Solstice to all !


Posted by Christine Sempers at 01:46 No comments:

The Winter Shaman or Who is Father Christmas?

The Winter Solstice has been a time both of trepidation and celebration for humanity for thousands of years
The power of the sun grows less and less, the world gets colder and colder. The leaves have fallen from the trees, all vegetation is dead or dying. The whole earth appears to be under a sentence of death.

Surely that demands a celebration, and so it has done for as long as there have been people to observe this magical turn around which we call the Winter Solstice.

There are deities associated with the Solstice, personifications of the celestial drama:
There is the child born now, the reborn Sun
The Mother of the child
And there is the Gift Bringer

It is the Gift Bringer who alerts humanity to the imminent birth.

In the New Testament it is Wise Men from the East who travel through many lands asking where they can find the magical child. Their questions awaken hope and anticipation - and also fear in King Herod who sees the child as a threat to his earthly power and kingdom.

The gifts these Wise Men bring are symbols which represent the powers of the Sun God:
Gold, the shining metal of the Sun, symbol of wealth, power and kingship
Frankincense, the incense offering to the bright Sun God who lights the day
Myrrh, incense and perfume used in the preservation of the corpse, the perfume of the hidden god, the Sun at Midnight, the god in the Underworld.

The Sun God is born in a cave (in Japan the Sun Goddess Amaterasu also hides her beauty in a cave and has to be coaxed out to bring light to the world) and at his birth the cry rings out: 'Lo! The Bridegroom cometh!'. Not the sort of cry which greets a new born human baby, but the cry which tells his followers that the Sun God leaps from his mother's womb fully adult and ready for battle against the powers of darkness.
In Aztec myths this is depicted in extremely graphic terms as Huitzilopochtli leaps out fully armed and firing arrows (sunbeams) in all directions which kill his sister Coyolxauhqui, the Moon Goddess.

The gift bringers sometimes foreshadow the birth, searching the land and preparing the people for the great event. Sometimes they appear on the day of the birth, or they may even be chasing along behind, late for the birth and giving gifts to all as they do not know which child is the potential Sun God.

In Britain we have Father Christmas, a vigorous elder dressed in a long green robe trimmed with fur, who leaves gifts to be found on Christmas morning.
The red coat our modern Santa Claus wears was put on him by the Coca-Cola company in the 19th century as an advertising gimmick.
In Belgium and the Netherlands Sinter Klaas, Saint Nicholas, leaves gifts in shoes and stockings on his saint's day, the 6th of December - he has translated into the American Santa Claus.
In Italy Befana, who looks for all the work like the classic image of a Witch, hurries along in January, dropping gifts as she tries eternally to catch up with the holy babe.

Although all of these gift bringers have been adopted as part of the christian festival of Christmas, their roots and origins are far, far older.

After a fair bit of fiddling about, our son Mike has managed to make a place online where you can view and download the current set of the Main Raven Catalogues to print your own copy if you wish.

They don't look exactly like the ones we send through the post as some of the Fonts I use didn't translate apparently. They will also be a bit strange to read as they are designed to be printed as a double sided document, so the pages will appear to be out of order. But if you can't find your copy and need to find out prices etc, it is a way of doing so.

Of course if you would prefer me to send you copies through the post, just give me a ring on (01482) 632512, or drop me an email at chris@raven.karoo.co.uk, or message me on facebook.

FREEBIE ALERT !!
Oh just a quick reminder that any orders placed this month will include a FREE empowered Charm Stone - you can get a random one or choose from, Love Drawing, Money Drawing, Health, Good Luck or Wishing (further stones are available at only 50p each. 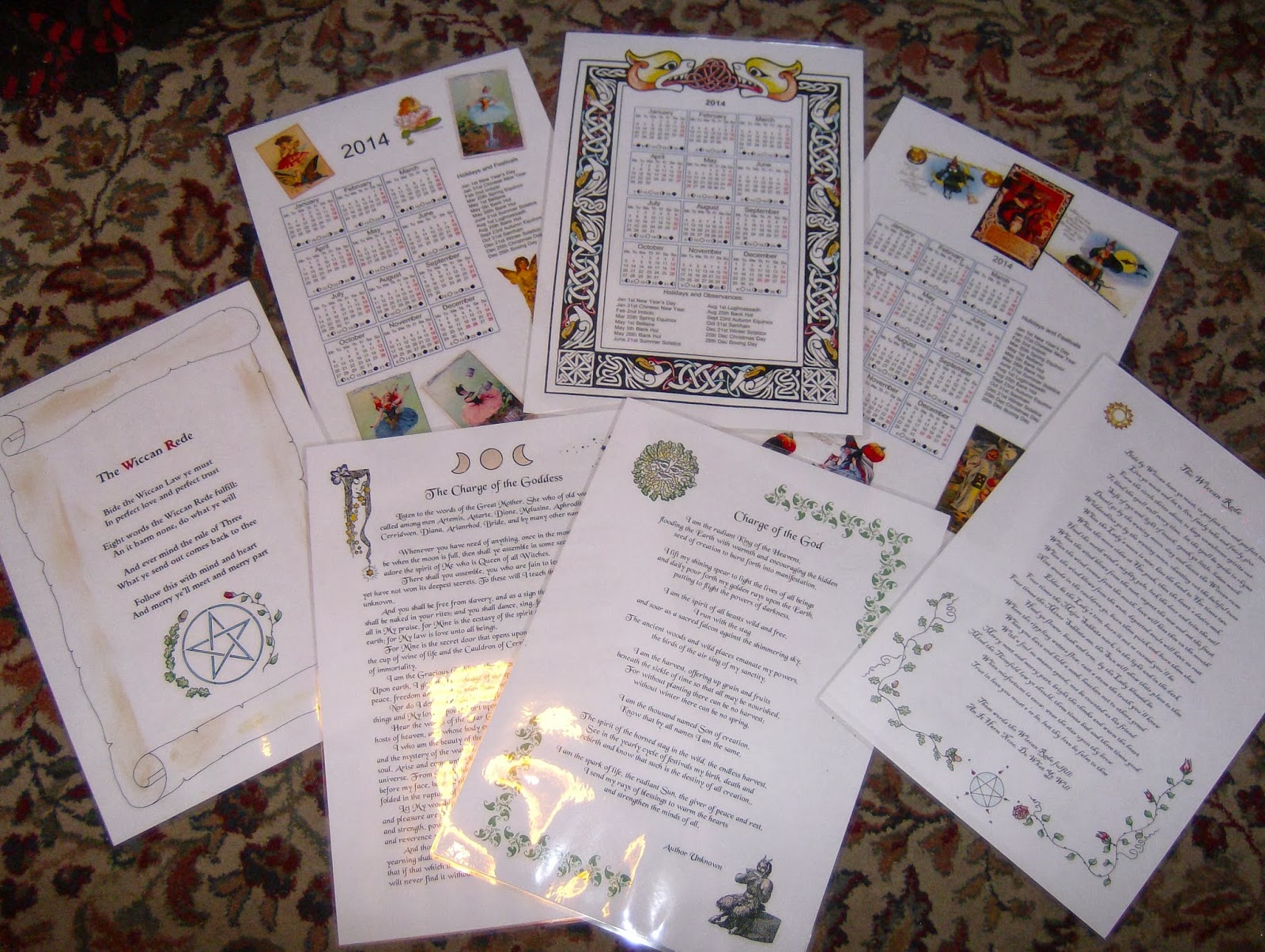 We haven't put the Flyer catalogues up as they usually contain lines which are limited stocks. But STILL IN STOCK at the moment are Raven Calendars for 2014 Witchy Calendar, Fairy Calendar, Celtic Calendar, and our new Laminated Posters of The Wiccan Rede (long and Short versions), Charge of the Goddess, Charge of the God all at £1.99 each


Posted by Christine Sempers at 05:59 No comments: