Today is the last posting date for first class UK mail, and traditionally when we have taken our mail to the Post Office today, then our Mid-Winter holiday starts!

Graham decided to mark the occasion by buying us some magazines while he was in the Post Office come general stores, and has just presented me with a pile of magazines. He is presumably working on the premise that if he bought a few, there was bound to be something in there I like.

So the choice I have is: Woman's Weekly - not seen that for years, that used to be one of my mum's favourites.

Prima - because it has a Free Puzzle Magazine included - this is not one I've every looked at before, so should be interesting.

Yorkshire Life: now this one looks the type of magazine you need to read at a table, cos it is sooooo heavy. But it also has a Free Calendar included (you might be able to see the way Graham's brain works - free = GOOD!)

I suppose I should think myself lucky that he didn't get 'Practical Woodworker', or a muscle building magazine. So if you want compact trailer with a custom UTV cage, or an electronic chicken door, or a packet of Layer's Pellets, this is the place to look - actually after a quick flick through, this might be a decent read!

If I don't post again before, we hope you have a restful and stress-free celebration, and a much happier and healthier 2021!

Posted by Christine Sempers at 05:11 2 comments:

I get the strangest requests from our customers and one of the most recent was 'Can you make me a leprechaun?' there was a pause while I thought about it.

December is one of our busiest times of the year, when we have to concentrate on getting out as many orders as possible as quickly as possible, and so right now was not the best time to be making a 'one off'. Especially one I would have to research and had never made anything like it before.

As I hesitated, the chap continued 'I don't mind what it is made out of. I know you like these little challenges.'

Meanwhile Graham had realised what was going on and was hissing at me 'Say no! We are too busy!'

So I compromised (ish) and said that I would make one, but I couldn't guarantee he would get it before christmas.

Anyway, I had a look on the internet at leprechauns which could be crocheted, and decided that the patterns were either too complicated, or too pared back, or too big. I wanted something simplish and not too big. So the only thing I could do was have a go at it.

I decided the head would be the awkward bit, as I needed it to be small but round, and it would really determine how big the body would have to be.

I must admit I had several goes at this, and they ended up huge, the size of a tennis ball, or weird shaped - I had one that looked like a rugby ball and would have made a good 'alien' head. Eventually. after much pulling back and starting again, I managed to get a head the shape and size I wanted (I even managed to give it a bit of a neck, which I was quite proud of).

Once I'd got the head made, I started on the body. The chest and arms were two 'T' shapes which I joined together. The legs were a bit more complicated again, as I wanted to make them in one piece, but with a bit of thought, and some more pulling back, I ended up with a pair of legs I was happy with.

I stuffed all the pieces and joined them together, then had a think about finishing it off.

According to some accounts leprechauns have red hair and beards, so mine had to have that, but I decided he would be a bit unkempt and wild looking. I also gave him some eyes. Then decided to have a go at making him a sort of top hat, with a buckled band, and finally a belt with a buckle too.

The very last bit I did was giving him some hands, peeping out of the ends of his sleeves. 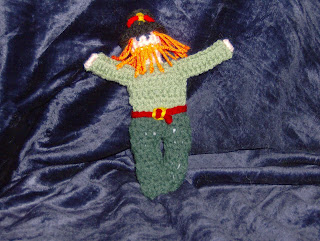 I am quite pleased with the result.

Posted by Christine Sempers at 03:25 No comments: