Autumn Equinox is not just a time of plenty for humans.
We have a large hazel tree in our back garden. It wasn't meant to be a large hazel tree, it was meant to be a small, ornamental corkscrew hazel. But the small ornamental corkscrew hazel was grafted onto a normal hazel rootstock, and suddenly - ta da! - there is a large hazel tree with a small twisty bit near its base.
Anyway, our hazel tree is a prolific and bountiful tree and at this time of year it drops hazel nuts all over the garden. We try and gather up as many as we can, as otherwise they root and we have small hazel trees coming up all over the place.
Actually, a little while ago, Graham went round the garden finding these hazel seedlings and potting them up for some friends of ours. They have a large hilly paddock with a wild corner in it, where they want to create a hazel grove. I think Graham found around fifty or so small seedlings, without any difficulty.
On Saturday, which was a lovely day, mild and warm, we had the back door wide open as we like to do whenever we can, and through the back door, Graham spotted a squirrel on the back lawn. It was stuffing the fallen hazel nuts into its cheek pouches, which looked to be full to bursting, and yet in went another hazel nut, and another.
We were glad to know that the nuts are not going to waste.
The hazel tree is known as the Tree of Knowledge in Celtic myth, and there is a story of an otherworldly pool overlooked by a hazel tree. In the branches of the tree slither serpents, the guardians of the tree and its special fruit.
In the pool beneath the tree swim speckled fish and as they feed on the hazel nuts which fall into the waters, the fish have become wise, and anyone who eats one of them will also gain wisdom and magical knowledge.
In some Witch traditions, a symbolic journey to this otherworld place is a part of the initiation ceremony. You must brave the serpent guardians and ask for the right to learn the magic and wisdom the tree and its fruits have to offer.

When Graham and I go to do our weekly grocery shopping, very often I wait in the car while Graham goes round the shops with a list.
We have found that it is usually quicker and easier for him to do this alone, rather than having to manouver me and my wheelchair about at the same time. Graham says that I am doing remote control shopping - although he does sometimes go 'off piste', which may involve beer, and one time he came back with a pair of strappy sandals he thought I might like (they were the wrong size, and will be lovely if I do decide to take up the oldest profession, but I was touched that he had thought of buying me something - actually one of the other (male) shoppers did say to Graham 'You're brave, I wouldn't dare buy my missus something like that!'.).
What used to happen while he was in the supermarket was that I would have a Sudoku book and do a few puzzles while I waited, get bored, get very bored, try to stop myself falling asleep - because I was BORED!
But now...... I crochet!
I have a special crochet kit I take with me and I can get little bits and bobs done while he is in the shops, and I really enjoy it. 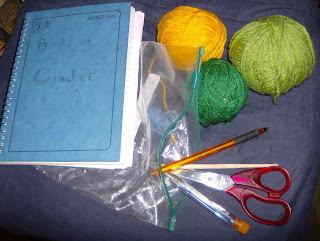 As you can see, my kit is quite simple, a few balls of yarn, my book of crochet recipes, a pair of scissors a pen and a bone crochet hook (which has two different sized hooks, one carved at either end). The phial has a few blunt needles for sewing in ends.
As I have been learning to crochet, I would scribble down instructions from the online video's on scraps of paper, I then decided to write them down properly in this book, so they are all together. The book has the basic stitches written down, as well as recipes in very detailed form - including the 'yarn over hook and push through, yarn over and pull back, yarn over and pull through two loops' etc.
Actually the bone crochet hook is there because one Sunday when we were going to a Boot Sale, when we arrived I realised I had all my kit, but no crochet hook. Luckily the very first stall Graham visited had this crochet hook which he bought and carried back in triumph to me.
So this has become part of our routine. Before we set off, I grab my bag of crochet kit, so I can amuse myself while Graham is shopping.
But this morning there was a crocheting emergency!
For some reason I had taken the grip seal bag containing scissors and crochet hook out of the bag (I needed some blunt needles to sew on some of the elements of The Bedspread!) and I'd forgotten to put it back in. I just assumed that it was in there and it wasn't until Graham had gone off to the shops, that I picked up my bag to start crocheting and realised ....... Oh No! No crochet hook!
Ye gods how bored was I? No crochet hook, no crocheting. I hadn't even got a pen either so I couldn't write about how BORED I was!
When Graham got back I told him the problem and we drove into Hessle so that he could go and visit the little haberdashery/craft shop. He bought an emergency crochet hook and scissors and put them in the glove box, so now if I do happen to forget my kit, I can still crochet! yay!

Posted by Christine Sempers at 09:25 2 comments:

Stage One of the bedspread is just about complete now - I know I have ends to fasten in and bits of finishing off to do. But all the 'fields' and other elements are now together as you can see here: 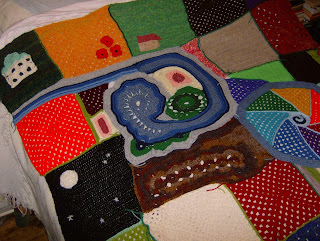 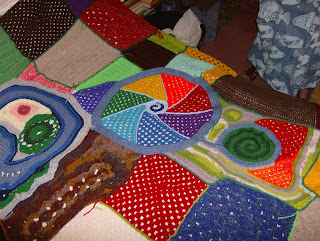 Although I am leaving the edge of 'sea' to the last as this is plenty heavy enough to manouver while I am working on the flowers, trees etc to go in the fields.
I have also already positioned a couple of my extra pieces, but there are lots more to go in or on.
I wanted the bedspread to not only have lots of interest when you look at it, but also lots of textures, so if you are laying in bed in the dark, or with your eyes closed, you can feel different things, maybe tell where you are in the landscape from its feel as well as the picture it makes. So I deliberately made the 'watery' parts lumpy or ridged, and also the edges of the 'fields' are mainly raised also.
Also because of the weird and wonderful selection of yarns Graham accumulated for me, there are some very different textures there too. There is the ultra-soft 'Teddy Bear' corn field, and there is a pink strip which has sparkly but scratchy feeling lurex. And of course the different stitches I've used also give different textures.
To be honest, this is turning out even better in reality than it was in my head.
I had no real plan, just a rough idea about what I was hoping to achieve - and it is getting there!

Incidentally there is already one hidden pocket in the bedspread. You see the little house in the corner of the green field, next to the corn field? Just by the poppies? That is a boat house, and inside it is a little yacht which you can take out and sail down the river to the sea, or up into the sky and visit the moon.


Posted by Christine Sempers at 03:28 No comments:

As I mentioned in my post on Crocheter's Cramp, I have been having fun piecing together the various 'fields' and other large pieces which will form the background and basic structure of  my bedspread.
This has not been easy as some of the pieces I've made are not in the least square or even triangular.
For a start I couldn't help looking at some of the gorgeous pieces of freeform crochet on the internet and I found a lovely instructional video from Sheru Knitting on making a swirly element. It struck me that this would make a beautiful base for my pond and river so I copied down the instructions and had a go at it. 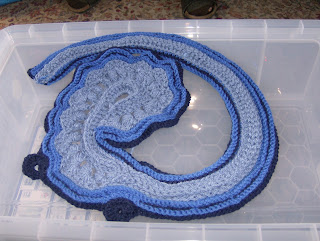 I did add a bit extra too it and made the 'tail' a bit longer - actually I have since made it even longer as I wanted the 'river' to reach to the edge of the bedspread and therefore reach the 'sea' edging.
One of the things I really liked about this tutor was that she said things like 'I have done 'x' number of these stitches, but you can do as many as you like.'
All through this project, I have been experimenting, making shapes or  little pieces which may be hidden in pockets, or fastened in place. Such as these: 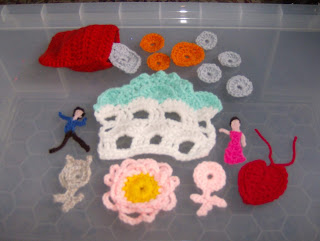 All of these are bits I just had a go at - I think the little couple may end up living inside the pavilion building.
One of the balls of wool Graham found was a soft golden-orange tinsel-like yarn called 'Teddy Bear' and I thought straight away what a beautiful field it would make, very like a ripe wheat field. I t also felt lovely and soft and cuddly. 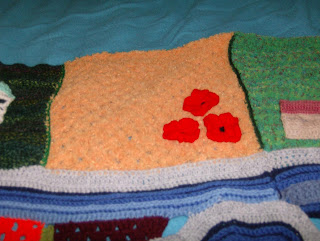 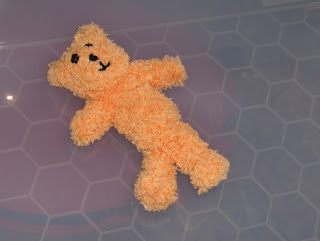 As you can see from the second picture, as it was called 'Teddy Bear' yarn, I just had to have a go at making a little bear. I know it isn't perfect, but I did not use a pattern, I just had a go.

Amazing what you can do when you are having fun with crochet!

Posted by Christine Sempers at 06:23 No comments: