Just before christmas last year we had a phone call from our Landlord's agents telling us that we were going to have to have central heating installed in the house.

I immediately went into a panic thinking how much stuff would have to be moved and where were we going to put everything?!
In January we had a phone call from the plumber telling us that he had been tasked with visiting our house to make a plan of where radiators would go, new boiler, pipework etc
Thank goodness it was a nice young chap we know from previous visits.
He duly arrived and toured the house with Graham looking at where radiators might be fixed. As soon as he arrived he said, 'When they told me I had to go and look at Mr Raven's house to install central heating, I thought to myself 'Mr Raven won't be wanting that!' '
Anyway he turned out to be a chap who wanted to make life as easy as possible for himself as well as us, so managed to point out places where radiators could go causing the least amount of stuff shifting and hassle.
A week ago, we had a call from the plumber saying his plan had been approved so he needed to make an appointment to come and get it stuck in. So we spent the beginning of last week preparing the house, moving stuff out of the way and leaving clear space for the plumbers to work when they arrived 8 am Thursday morning.
Luckily there were only two of them, and Paul (the boss) had already told us it would just take two days to fit it. Also luckily both men have dogs and like dogs - which was very good as we knew our two, and especially Tallulah, was going to want to watch everything they did.
As soon as they arrived a large lorry also arrived and a great pile of radiators and copper piping was unloaded into our front garden.
It wasn't until the lorry had gone that Paul checked the invoice and found that they had unloaded a set of radiators for another job of his, a large house in a nearby town. So he was quickly on the phone to get the right ones delivered - which they were within a couple of hours. The plumbers were able to use some of the piping and smaller radiators to get started, so there was no delay that we could see.
We tried to get on with work as best we could, and keep out of the plumbers way.
On Friday we had to go shopping and it was actually quite nice for the dogs to have someone in the house while we weren't there. Tallulah attached herself to one of the plumbers and ended up sleeping next to him while he was working.
During one phone call from a customer that I know well, I said the house was upside-down because we were having central heating installed. There was a stunned silence at the other end of the phone. 'We only had double glazing installed last year.' I went on. More stunned silence, then:
'Do you have an inside toilet?' she asked
Aah, there we are children today who don't realise that you can live without double glazing and central heating.
And yes, we do have an inside toilet!
By four thirty on Friday afternoon the central heating was installed, including a large radiator in our bedroom, 'I bet that one is never turned on.' said one of the plumbers sagely - and he is right, I hate trying to sleep in a warm room. 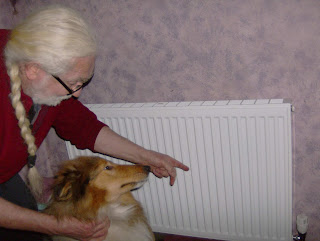 Graham with Tallulah pointing at large radiator in our bedroom.

Posted by Christine Sempers at 02:25