When I was walking on the stair
I met a man who wasn't there,
He wasn't there again today,
I wish that man would go away!

When most people speak of 'ghosts' they mean a remnant or a remainder of a human spirit. But there are many different sorts of ghosts - and not all of them are human!
Anyone who has attended a spiritualist meeting, or a demonstration by a medium, will know that although the medium is passing on messages from various spirits, the audience rarely, if ever, sees or hears anything other than the medium speaking. The medium may be hearing, and sometimes seeing the spirits as well, but it is very rare for anyone else to see these 'ghosts'.
In his book 'The Power of the Pendulum', Tom Lethbridge put forward the idea that some ghostly activities are the result of a kind of spirit recording. That rocks, landscape and atmosphere, or weather conditions, can combine to act as a way of recording a traumatic or highly emotionally charged scene. This is a way of explaining sighting of ghosts that seem to always act in the same manner, for example: The ghost of Queen Katherine Howard is said to run screaming along certain corridors of Hampton Court Palace, her spirit eternally trying to reach King Henry VIII and protest her innocence.
Some ghosts appear to be 'bound' to a certain area, a house or garden perhaps. This may be because they loved this place while living, or because they do not realise they are dead, or simply do not know how to move on from the physical world to the spirit plane.
There are many tales of ghosts appearing to loved ones, often miles away from their physical body, either at the time of their death or shortly after.
Not long after my dad had died, I was alone in the house and began crying. I distinctly heard my dad say, 'It's alright, love.' in a comforting way. And I was comforted, I certainly was not frightened.
But ghosts are illusive creatures, there is no guarantee when or if they will appear.
These days you get TV programmes where people stay over night in a dark 'haunted' house, with the express purpose (it seems to me) of scaring themselves and their audience witless.
I can honestly say that no true ghostly encounter that I have had, has ever been scary.
In fact it is possible to have a ghostly encounter and not realise it at the time.
Because of film and TV  depictions of ghosts, we expect them to be shadowy and transparent, but very often true ghosts look perfectly normal. They look like anyone you could meet on the street, perfectly solid and definitely not see through - and I have never ever come across any ghost that looks like a floaty sheet with a face!
It is often only an anomaly which makes you realise that what you have seen could not have been a living person.
In York it is said that a ghostly column of Roman soldiers marches through the cellars of some buildings. They are walking along the original Roman Roads of the city, but because the road level was much lower than the present surface, they only seem to appear from the knees upwards.
In some cases it is what a person is wearing which gives the clue as their clothes are obviously from an era before the present - but with the modern passion for 'vintage' fashions, that may be the clue it once was. Or they may be performing an activity or action that we no longer do, or may walk through a door that no longer exists.
They may even greet you quite naturally when passing in the street, although a man tipping his hat to you, might stand out as being rather old fashioned.
So it is quite possible that you have had ghostly encounters, without realising it.

Posted by Christine Sempers at 00:57 No comments:

Last Saturday we had a phone call asking if we would like a doggy visit from Charlie (I nearly wrote that as a 'dodgy visit').
In fact, would we be ok with a doggy visit that lasted overnight? (Definitely a dodgy visit then!)
Our son had persuaded his missus to go out for the evening and didn't want to leave small pooch on its own for several hours.
Of course we said we'd be happy to have Charlie. She is no trouble, as long as you make sure anything you would rather she didn't chew is out of reach.
Mike said that as his car was approaching our house, Charlie got more and more excited as in 'Can I get out? I know where we are going! I want to go play!' So, rather than just bring Charlie in with him at the front door, Mike popped Charlie over the fence into the back garden, to see what would happen.
The first we knew of their arrival, was the sound of an earthquake as a small black dog burst in through the dog flap and thundered through the house. She was in the living room before Mike and Eden got in the front door! Two seconds later she had said 'Hello!' to everyone and she and Tallulah were barrelling out again, into the back garden.
There followed much galloping in and out of the house as the two youngest members of the family attempted to tire each other out.
Graham said he had peeped out into the garden and saw them chasing round and round with Tallulah in the lead and Charlie hanging onto her tail.
At bedtime, all dogs were given their supper bickies and we all went to bed.
Mike hadn't brought Charlie's bed this time, but there are plenty of places around the house for doggies to sleep. Including the sofa, floor cushions, Tallulah's dog bed, under the spare bed (special doggy cave) etc.
We think Charlie tried them all out. Including on our bed and under it.
Oh, and there was also the 'incident' in the night.
Graham got up to go to the loo and found that Charlie had crapped at the top of the stairs.
Now, unlike most dogs, Charlie does not stand still and crap all in one heap, but instead wanders around a bit, dropping nuggets here and there across the landing and into the office. Graham cleared it up and went to dispose of it.
Meanwhile I was also now wide awake and decided I would also go to the loo (which is downstairs in our house).
As I left the bedroom, I found a 'present' which Graham had missed - by stepping in it, barefoot, of course.
Sunday morning was the Humber Bridge Farmer's Market, which we love to visit.
So we had arranged to meet Mike and Cherise there, so they could retrieve small pooch and we could all have a look around (and buy many good things!)
Charlie behaved brilliantly in the car, in fact she curled up and went to sleep on the back seat, but Graham did say to Mike and Cherise when we met up, 'Give us a couple of days before you bring Charlie again.'
That night as we sat relaxing in front of the fire, me untangling a ball of wool which Charlie had managed to find and give a darn good shaking to, while wearing my reading specs with the well chewed side arms (Charlie again, not me), I said to Graham, 'I think we will all get a good nights sleep tonight!' 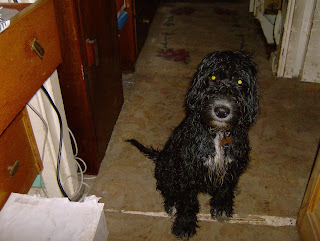 Posted by Christine Sempers at 01:22 No comments: