The 20th of March this year was the time of the Vernal or Spring Equinox.

We are told that the powers of light and dark are in perfect balance and harmony. Well, they might be in balance, but that does not mean they are in harmony.

At the Spring Equinox we are in the middle of a dynamic switch between primeval energies. This is sometimes portrayed as a battle between the Winter King and the Summer King, or Jack Frost and the Green Man.

The prize they both desire is the Spring Maiden. This is the Queen of Winter, the White Lady, who at this time returns to the Upper world, bringing hope and new life. She is reborn and re-gains her Maidenhead.

In nature as in the Universe there is no such thing as a balance for all time.

Everything is in a state of constant flux and change. None of us can remain the same, neither can nature. Things are born, grow, evolve, change and die.

There is no such thing as 'natural balance'. Now, natural imbalance is far more accurate.

In the UK we have 75% of the worlds moorland, and conservationists are working hard to maintain this special environment.

Note the phrase 'they are working hard' to maintain it, because moorland is not a natural environment. It was created through the actions and activities of humans.

Once upon a time, all of that land was woodland and forest, but by cutting down the trees and clearing the land, moorland was created. Given half a chance and left to its own devices, it would become woodland and forest again - that is its natural state.

Everyone who lives by the sea will know that you have to keep an eye on the tides. The sea retreats down the beach, then advances back up to the base of the cliffs or sand dunes over a period of hours, and at certain times of the year the height of the tides or the difference between high and low tides can be greater.

The biggest differences of all are found just after the Equinoxes.

The sea is never still, it is always moving. Sometimes it thrashes and lashes with great violence, at other times it is calm and gentle, but its moods can change with great rapidity.

The Equinoxes are times of change.

These changes will occur whether we like it or not. So perhaps this is a good time to learn how to embrace change. To understand that sometimes we just have to go with the flow - and it could be a bumpy ride!

Posted by Christine Sempers at 04:23 No comments:

Yes auto-correct spelling thing I have put 'Maths' above and I mean it - not the American spelling 'Math' - get over it.

I may have mentioned my next big(ish) project which I have decided to try and create an underwater scene, which will involve, coral, sea shells, fish etc. So I put 'crochet coral' into the Google search thingy and WOW! up came an exhibition of enormous crocheted pieces by Margaret Wertheim and her sister Christine who are based in Los Angeles.

I was fascinated by the intricately curly pieces they had created, and which look enormously complicated to crochet.

After a bit of searching on the Net, I found that this was a well known thing called Hyperbolic Scumble and is actually very, very easy to have a go at, and to create some fab pieces. 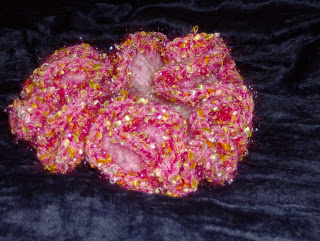 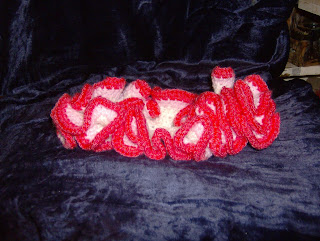 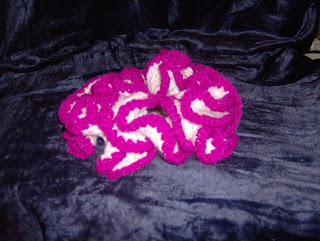 The main principle is very simple: each round you increase the number of stitches in a set sequence you have decided upon before hand.

So, for example, your pattern might be, increase a stitch every other stitch, or every third stitch or every fourth stitch. You must also decide on your basic shape before you start. The standard shapes are either rows or rounds. In the above photos the top and bottom ones are based around circles, the one in the middle is a 'dumbell' shape, two circles connected by a straight piece. And basically you just go round and round working your pattern.

Now most folks who do crochet will know that when you are making a flat circle, you have to make increases in each row in order to keep it flat. If you do the same number of stitches in each row, your circle grows upwards like a vase or cup, instead of laying flat.

So if you make more increases than this in each row, your 'circle' becomes more and more wavy.

So I thought I'd have a go. And the standard pattern which you come across says that you should do one stitch, then do two in the next stitch, ie making an increase every other stitch. Now if you know the pattern for circles, you will immediately see that if you follow this for your second round, you are actually doing less stitches than you should do to make a flat circle, the third row will be the same as for a flat circle, and to be honest the fourth doesn't look much different.

I was getting a bit frustrated and thought I was doing something wrong when I'd done three or four rows and nothing much seemed to be happening. Until I came across a little throw away comment on one site which said: 'You won't notice much different until around the 6th row ....' Which meant that being the impatient person I am, I hadn't given the pattern long enough to develop!

All of these are done with standard double knitting wool and all of them have five rows of double crochets and a sixth row of single crochet edging.

I am very pleased with them and they should go into my finished piece nicely. But I am going to do some more experimenting, varying the number of single stitches, and yarns. 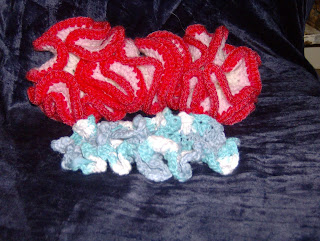 This last pic shows one of my first experiments. This uses a yarn which is thick and thin and varigated. And in this one I used the standard pattern of one single, one double on a crochet chain, but working up one side, around the end and back down the other side. I did three rows of double crochets, but in the third row I did two stitches in each stitch around the ends, then the 4th row in single crochet, two stitches in each stitch.

I was after something that looked a bit like a sea slug and am quite please with the result.

Incidentally isn't it annoying when people start every sentence with 'so,' I shall be really glad when this fashion is dropped, the same as that inflection which sends the end of every sentence up, so it sounds like whoever you are talking to is continually asking questions instead of making a statement:

Posted by Christine Sempers at 04:01 No comments:

Every dog we have had, have all had totally different characters.

Every dog owner will tell you the same.

And the two we currently have are very, very different characters.

Tallulah is coming up to three years old this summer and Bridie will be eleven this year. So it is no surprise that Tallulah is bouncy and cheerful, loves everyone and thinks that everyone will love her too. While Bridie is restrained, elegant and aloof.

Bridie was a show girl - she has been to Crufts - and was a mature dog when we got her. I don't tink she had ever learnt to play (although Tallulah is quite persistent in trying to get her to join in chasing and bouncing games).

Tallulah is also quite uninhibited when it comes to getting your attention. There is no way you will be able to ignore her. She will nudge you quite firmly with her nose, so you get poked in the arm or in the side, or if you are writing a furry nose will lift your hand up. And if that fails, then her front legs are up on your knee and you nose, ear, or whatever part of your face she car reach is given a good snuffle and lick.

This is not something Bridie has ever learnt.

Instead Bridie has developed the Hypno-dog stare. 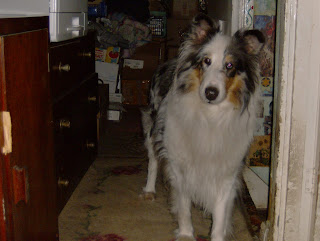 Between the 1st and 2nd World Wars there was a Music Hall act with a dog known as 'Hypno-Dog', and at some point, while they were touring the UK, the dog managed to go missing. Posters were put up and there were even announcements in the Newspapers, asking people to be on the look out for the missing dog. But at the same time they were warned that under no circumstances should they look Hypno-Dog in the eye, or it would put them to sleep.

Well, we have our very own Bridie the hypno-dog.

As I said, she has never learnt how to do the in-your-face demanding attention thing. But instead she has developed a very disconcerting stare.

You may be reading a book, or working at the computer and suddenly you are aware that you are not alone.

And when you look round there is Bridie, stood stock still, staring at you. Staring very, very intensely at you.

And into your head will come the message:

'You WILL give the dog a biscuit!' and you find yourself reaching for the dog biscuit box.

And when you turn back, silently the ninja hypno-dog is now an inch from your leg, but still with the unblinking hypno-dog stare.

Sometimes it isn't food but a cuddle she wants. Again she has never learnt how to just throw herself at you in a 'Cuddle me!' demanding sort of way, so instead she positions herself sideways in front of you and gives you the hypno-dog stare! But when you do cuddle her, or stroke or rub her head (which she loves) you feel her gently relax and collapse against you.

Bridie has also decided that she likes the occasional cup of tea or coffee. Now, I know that dogs should not routinely be given tea or coffee as the caffeine is bad for them, but for a start I drink red bush tea (no caffeine) and the way I like tea and coffee is so weak that it is fortnight!

Besides which, the first time she decided to give tea a try, there was not a lot we could do about it.

That was last summer, out in the garden. My mug was standing on the grass cooling and the next thing we knew, a certain dog had got her head stuck in the mug and she was not coming out until all the tea had been drunk!

So occasionally after tea, when we are watching TV and relaxing with a coffee, I become aware that Bridie has decided that tonight is the night for a sip or two of coffee.

Tallulah has also learnt to recognise the 'hypno-dog' stare and watches happily as Graham is directed to share the cool remains of my drink into two dog bowls.

So all I can say to you is:

Beware of the Hypno-Dog - and under no circumstances look her in the eyes!

Posted by Christine Sempers at 03:26 2 comments: