This is not an excuse

Hi folks this is an apology if you have been waiting longer than usual for your order.

But sometimes stuff happens, and sometimes it happens all at once so here goes:

When we put a Mail Shot out, everyone gets it at the same time, and because they know that a lot of the stuff we sell is of limited quantities, EVERYBODY orders at the same time, so instead of our normal work load, we may literally have ten times the number of orders.

This is lovely, and I would not want to put anyone off ordering, but it does mean that we can't get through them all as quickly as we would like to, and therefore some people will end up having to wait longer than usual.

Now, this last Mail Shot was an update of our own publications, which should have made this very quick to deal with orders. But unfortunately just as we got the Mail Shot in the post, that very week our suppliers decided to deliver our brand new photocopier. Yay!

Well not quite as Yay! as we were hoping because they brought the new copier, plugged it in and took our old one away. They did not install it on my work pc - which is not attached to the internet for security reasons - nor did they show me how to use it.

After several phone calls to our supplier and being put through to the IT department several times, where I explained (several times) they could not do anything remotely to the photocopier as it and my pc ARE NOT attached to the Internet. They finally decided that an engineer should be sent out to do the installation and give us a tutorial. That would be 'in the week'.

Needless to say, no engineer turned up that week, so I rang them again on Monday morning. So it was the Wednesday of the following week when a nice young man arrived and attempted to install the photocopier.

Eventually he got it going and explained the basics of using it to me. It was working lovely so I was ready to start printing books, fact sheets etc on Thursday. On Thursday, the photocopier refused to speak to my pc, nor did it want to photocopy double sided nor collate (put the pages in order).

After another phone call the nice young chap turned up again and after consultation with another engineer decided I needed new drivers, which sorted that problem out. But it was now nearly two weeks without a usable printer! And I had a printing list as long as my arm.

Anyhoo I got most of the printing done over the weekend so I only had to put them together on Monday.

On Monday the big Heatwave started, and upstairs where my pc and photocopier are, was not somewhere you wanted to be!

I could only stand it so long, then I had to go downstairs and get in a cool bath. The heat was making me feel quite strange - so I'm afraid that made getting the books together a much longer job than anticipated.

So if you are still waiting for your order, I do apologise, but we will get it out to you just as quickly as we (me and Graham) are physically able.

Posted by Christine Sempers at 02:50 No comments:

Tallulah's babies are three weeks old today, and are already developing their own personalities.

First here we have Sun Dancer, known as Dancer. He has very distinctive facial markings and is a little explorer. He is also the puppy who actually sits and howls when he wants his mum, wants to go out of the cage, wants to go into the cage or is just generally bored. Dancer may well become an escape artist. 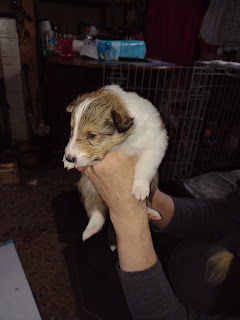 Next we have Dawn Singer (Singer) he is the most placid of the pups (at the moment) and seems very good natured and easy going. He has got himself settled and gone to sleep on Graham a couple of times already. 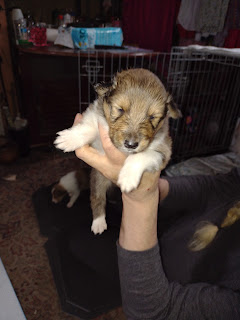 Here we have Morning Glory (Glory) who is the biggest of the puppies and manages to have a feed whenever possible. She seems happy and friendly, but always first to the milk bar! She also seems happy to have a stroke and a cuddle (as long as mum is nowhere about). 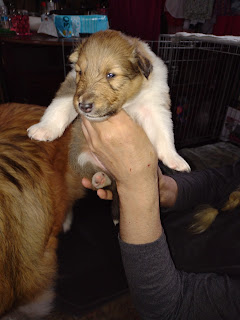 Finally we have Black Betty (Betty) who is the only tri-colour of the bunch, the others are all sable (the boys will possibly be shaded sable - having a slightly darker colouring). Betty may well be the weirdo of the bunch also, and probably because we picked her as the one to keep.

She has learnt to make a very odd, deep rumbly noise, not exactly a growl. The first time she did it, she was mooching about in the back of the cage on her own, and everyone stopped and looked at her in amazement. 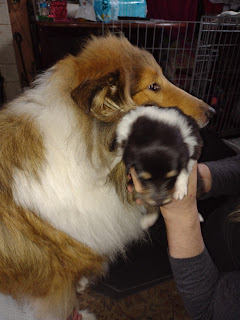 As you can see Tallulah got in on this photo and you can see just how much the puppies have grown in only three weeks.
Posted by Christine Sempers at 02:32 No comments: