Every season there is something to look forward to. And we look forward to these things because they are transient.
They come and they pass and we won't see them again until the Wheel of the Year has made a full turn again.
In the Spring we look forward to the new leaves appearing on the trees. I watch our hawthorn through the kitchen window and suddenly there are little beads of green, like emerald jewels appearing along its branches. They swell, almost as you watch them, and burst, popping out the tiny spikes of bright green leaves.
Every day there are new flowers appearing in the garden. Or the new leaves of plants which will flower in the summer.
It really is a miracle the way the barren, bare, brown earth becomes covered with leaves of wild garlic, primroses, foxgloves, alkanet and comfrey. 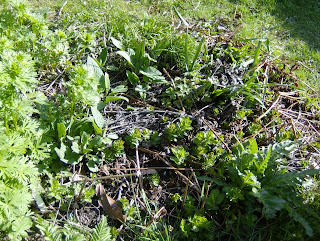 At the same time the days are lengthening, the nights growing shorter. This is dramatically apparent when we change the clocks at the end of March, and the evenings are suddenly even brighter and longer.
There is no wonder that Spring is the season of youthful Goddesses and Gods. They return from the dead, they emerge from the Earth, they are re-born and grow with the plants and the light.
This is the time of the Maiden and those spirits which care for all young creatures. Dummuzi or Tammuz is the young shepherd who returns in Spring to the loving arms of Inanna. Attis, the young bull, returns to Kybele.
Even the Queen of the Underworld, Persephone, puts away her crown and returns to her mother Demeter, and becomes again the Spring Goddess, Kore.
These returns are all times of joy, and made even more joyful simply because of their transience.
Time will pass, the plants will flower and mature. The trees leaves will change from the bright yellow-green of Spring to the darker green of the mature woods.
The young gods will grow older, mature, become bored of their older lovers and seek new loves amongst the fresh, sweet young humans, and sow again the seeds of their own Autumnal destruction.
But for now we shall forget the future, forget what is to come, and instead celebrate the return of Life to the Earth.
Plant some plants, sprinkle some seeds. Make a bird table or put up some nesting boxes. Make your garden a place to welcome Life and it will also breathe new life into you.


Posted by Christine Sempers at 04:10 No comments:

Last Wednesday night we had a phone call to confirm that on Thursday 'the men' were coming!
'What time?' I asked
'Eight a.m.'
We were (of course) up extra early on Thursday morning so we could move things away from the windows, check that EVERYTHING had been removed, take down curtains and dismantle Graham's gaming computer which is in front of one of the windows - this meant unplugging various wires (will we remember what plugs into where?)
At eight a.m. nothing happened.
Nothing continued to happen until nearly nine a.m. when two vans turned up and I was asked to move my car so they could park in front of the house.
MANY men got out of the two vans and began to unload MANY windows and two doors.
'You are having all windows changed.' said a lad with a clipboard.
'Not as far as we know,' I said, 'Only the big windows and not the back door.'
'Which windows are you starting with?' I asked
'All of them.' he replied and went away.
Graham took the dogs out for a walk while EVERYTHING commenced.
There were men all over the house, upstairs and down, and I was astonished to find that their first job was smashing our existing windows to remove the glass. I'd sort of imagined that they would run glass cutters around the frames and lift out the glass in panes, but no it was hammers, big gloves and pincers. And it seemed that, yes, it was all of them at once!
By the time Graham and the dogs returned I was sitting in a very breezy living room, with openings to either side - well at least I was getting plenty of fresh air.
Once all the windows and doors were off, the openings were checked, slight adjustments made to the ready-made frames and these seemed to be quickly slipped into place and secured with very long brass screws to the walls. There was much galloping up and down stairs, hammering, banging, sawing and drilling, but soon they were on to the finishing touches. The windows were cleaned inside and out, sealant squirted around the frames and smoothed into place,and all grit and dust cleaned from the window sills.
Just before they left we were instructed how to use the new locks, which Graham has mastered but I can't get the hang of.
We also found that yes, ALL the windows have been changed and both doors.
But the back door has a large dog flap and a large glass panel in it. Unfortunately the glass is frosted, so negates the whole point of why we wanted a glass panel - so we could see out into the back garden and watch the dogs and wildlife. But at least the dogs are catered for.
They were all done by 2.30ish so only five and half hours of disruption. As soon as they'd gone Graham got the vacuum cleaner out and went round the whole house - it was amazing how much tiny glass 'sand' and pieces he picked up.
The fire draws ok and the dogs are getting used to their new door.
The fitted doors look nice, they are both black wood effect, and I'm sure the house is far more insulated, which we are told will make it warmer in the winter.
It just looks a bit too swish and posh to be our home. We are no longer rustic and a bit country shabby.
I am sure we will soon get used to it - and a few coloured glass bottles in the windows will help matters enormously! 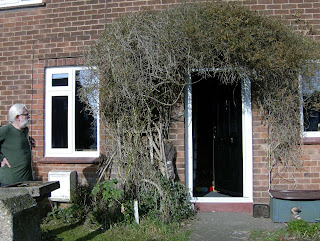 Incidentally, when I had taken this photo, I found that I could not close the new front door, so we shall be seeing at least one of the workmen again before too long!