You've Done What With It ?!

Graham and me are not tidy people.
Thank goodness this applies to both of us. If only one of a couple is untidy, they would drive their partner mad!
Anyway, because we are not tidy people, things accumulate in drifts and heaps around the house. These are often 'themed' heaps and can last for years.
Such as: clean clothes accumulate in the clean clothes basket in the kitchen.
This means that rather than trailing all the way upstairs to fight your way into the wardrobe (which has a pile of boxes piled against the doors) you just rifle through the clean washing basket and wear the first whatever of yours that comes to hand.
The system works pretty well, because we both know vaguely which heap you might find something in.
The trouble starts when we have an 'Oh God! I can't stand this mess any longer!' episode, and PUT THINGS AWAY.
For a few days afterwards, maybe up to a week, the house is clear and tidy, then the heaps begin accumulating again, in small ways.
But the damage has been done!
Stuff has been PUT AWAY, and because we are used to whatever it is being in that heap over there, and it is no longer there!
We have no idea where it might be.

And so it was, after the plumbers had been and fitted the central heating, we had a sort out in the kitchen.
For many years we have accumulated spare pairs of 'Pound Shop' spectacles, so that when our favourite pair gives up the ghost, we will have a spare pair ready to go. And all the spare pairs were dotted on the shelves of the dresser in the kitchen.
We had this bright idea that just laying about loose, as they had done for many, MANY years, was obviously not good for the specs, the lenses could get scratched etc before they came into use. So in a moment of tidying up madness, we gathered all the pairs of glasses up and PUT THEM AWAY!

This morning Graham's glasses, which he wears constantly, fell to pieces, so a new pair was called for.
This would be no problem, because we always have several pairs of brand new Pound Shop specs ready and waiting for action. He went to the dresser in the kitchen, where the glasses always are and there were NO GLASSES THERE!
Dum, Dum, Daaaaaaah! - dramatic music.
We have put them away. In a safe place.
Where that 'safe place' is, neither of us can remember ......
Luckily he did manage to find a pair that we had missed during the tidying up session, so he could see to take the dogs for a walk.
It is a good thing that even when we are tidying up, we are rubbish at it!

I have just finished this bedspread/blanket. 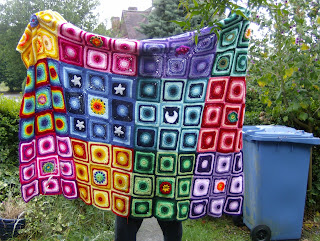 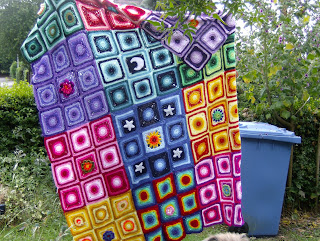 As you can see, it is colour-tastic!
The pattern for most of the squares is a very simple one, three rows of circle, then a row which changes it to a square, then three square rows.
As you can see I made this one is blocks of nine squares, and each block of nine uses four shades of a single colour. The central square of the outside circles has a flower in it and I tried to make all of these different. There are three 'cosmic' blocks in the central row which are a little different. The rainbow squares have seven colours, representing the rainbow colours, but it is surprising how different they look when you just put the colours in a different order. These alternate with red at the centre and purple at the outside, then purple at the centre with red at the outside.
I have used this same principle of colour variation in each of the blocks, the colours of each nine square block are the same, just used in alternate orders
Then we have the Sun block and the Moon block. I actually started this crochet by making the corner squares for the Sun block because I wanted to try the pattern of offset corner squares. But I was a bit disappointed that I had to applique the stars rather than working them in the squares.
The central Moon square, on the other hand, does have the Crescent Moon as an integral area of the square.
I really had fun with the colours on this blanket. Each of the squares is 6" across, so each block is 18" making the total width four and a half feet, and the total length six feet, the size of a standard double bed. But I think for practical purposes it would look better on the bed if you put it on sideways - which is why I've got two pictures showing it in both orientations.
Graham is holding the blanket upside down in the long ways pic though - well I think of the rainbow square as being at the 'top'.
Lol I have just noticed that we have some lovely pictures of our re-cycling bin included! 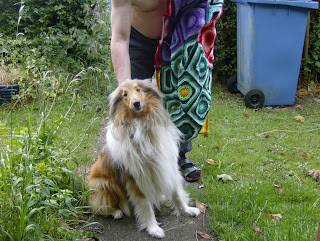 Oh and here is a picture of Tallulah, because you can never have enough pictures of beautiful dogs. 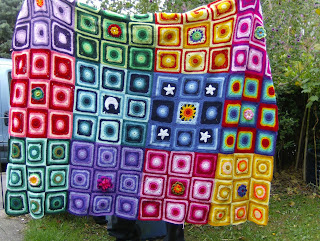 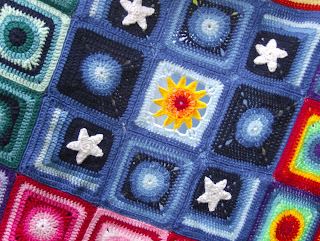 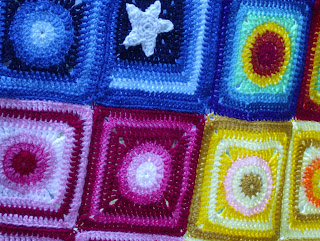 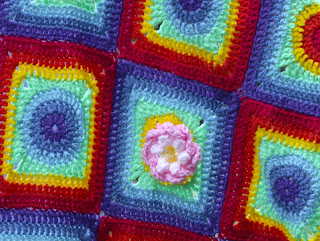 Of course after I'd finished this piece, I then decided to have a go at doing a few close ups, so here they are.

Posted by Christine Sempers at 01:31 No comments:

We are heading towards the longest day of the year, with nights growing ever shorter. In the North of Scotland it never gets fully dark at this time of year, there is a glow in the sky even at midnight.
Will there be Druids at Stonehenge for the Solstice this year?
I dare say there will be some folks there, no matter what restrictions ought to apply.
The Summer Solstice is another of those magical times when time seems to form a link back to our pre-history. The nights are mild enough to encourage people to want to be outside. You might want to watch the stars, or look out for Fairies, or to gather magical fern seed which allows the bearer to become invisible.
This time was known as Mead Month to our ancestors. The time when meadows and gardens are full of flowers, when bees are at their busiest and buzziest, gathering nectar from every flower they can.
Will Shakespear understood the magic of a Midsummer's Night, when dreams could become real, then fade away with the dawn's light.
The Fairies love Midsummer. Their powers are at their height too. They ride out from their mounds, through rocks and out of pools and waterfalls. And if they find a pretty lass or a handsome lad, perhaps they will seduce them away to Fairyland.
This is a time for magical dreams, for spirit journeys. A time to be transported from the mundane to the magical.
Find a triangular leaf and use a pin to inscribe it with this magic square:

Wrap the leaf in threads of three colours, white, yellow and green, and put this package beneath your pillow.
Prepare for a night of adventures, of flights to strange lands, of meetings with wise and beautiful creatures.
Before you go to sleep say three times:

Carry me far, carry me flying, carry me fast,
Far and away, 'till break of day,
Then home at last.

The leaf will become a magic carpet, embroidered with symbols, signs and words of Power, which only you can read. Board it and let it show you wonders.
When you return to your bed next morning, write down all your adventures, as the memories will fade away quickly.

Oh and by the way, although the Midsummer Solstice may be a point in time, the magic of Midsummer is already upon us and will last through this whole Moon time.

Posted by Christine Sempers at 02:01 No comments: