Yes I have been Crocheting

Yes I have been busy with the crocheting over the last few months, but it has taken me a while to get used to taking photos with the new camera/phone thingy.
I couldn't get the blasted thing to work, no matter how I pressed the button. It would zoom in and out, and when it did deign to take a photo it would be dark or wobbly.
So eventually I asked Mike (feeling an idiot for not being able to get the damn thing to work when 'it is sooo easy!') It turned out I was stabbing the button too quickly! You have to let your finger rest a tad.
So here we have the first offering, which is a yellow shrug/shawl using a 'pineapple' pattern which I really wanted to try. Graham had bought me several enormous balls of this bright yellow wool, so it seemed appropriate to try.
This is a pattern I found at The Spruce Crafts called Pineapple Doily Shawl. Now I went wrong a few times when I was trying this. There was much swearing and pulling back of the pattern.
I suspect I still didn't get it right as it seems much fuller than the illustration on the web site, but I think it turned out ok, and is definitely wearable. 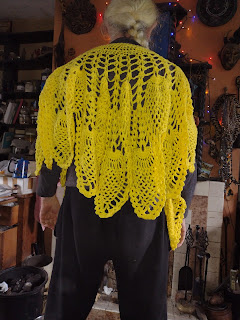 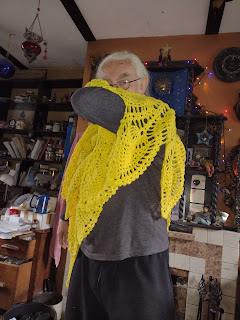 This next one is a variant on a Boho style 'vest'. It is basically a round shawl with a couple of holes in you can poke your arms through. I couldn't find exactly the pattern I wanted, so I decided to have a go and see what happened.

One of the problems I have with most patterns is they are designed for skinny little lasses, and I am of generous proportions, so they are never going to be wide enough. But this one (modelled here by Graham) does fit and I am chuffed with it. It is mainly a sort of 'fishing net' pattern, lots of loops of chains, with the next row of chains joined to the middle of the previous row loop. Increasing was a bit of an experiment, but seems to have worked out ok. 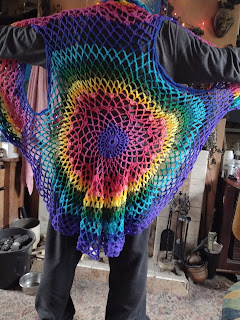 This is one of my latest projects, a fun shopping bag, and is based on free patterns found at Attic 24.

There is a pattern for a Crochet Bag, which is lovely, but for me was a bit too big diameter at the bottom - and I think I might have been using too thick wool as well which made it even bigger. So I used the idea and made my variation on it.

The bottom is nine concentric circles, then to make the sides, when you have got the bottom the right size for you, just crochet round without increasing, and you will make a tubular shape. I did increase slightly on a few rows as I wanted the top to flare out a little bit. The two handles are just strips 5 stitches wide, make them as long as suits you, and make them the same length (obviously).

I have decorated the bag with flowers which is another pattern from Attic 24, Triple Layer Flower. I made some flowers with just one layer, some with two and some with the full three layers of petals.

I found it surprisingly quick to make. 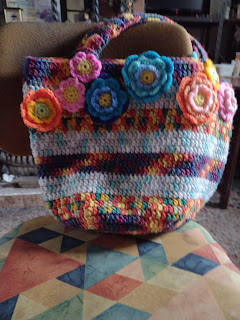 And just in time for the Platinum Jubilee I have been crocheting some decorations. So here we have a string of bunting made in red, white and blue. These are a very simple Granny Triangle and it took no time at all to make a pile of them which I joined together with a chain stitch ribbon 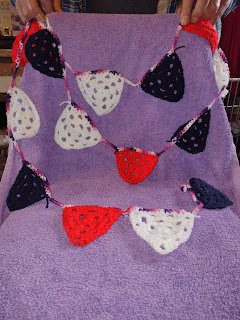 Finally I decided to have a go at a sort of Union Flag. Which actually turned out to be more fiddly than I expected. The central bit is Attic 24's Triple Layer Flower again, with the four arms made up of single colour flowers. For the triangular pieces I used the central part of a Triangle Motif from thechillydog.com The 45 degree red and white bands are my own bits of 4 stitch wide red ribbons, bordered by double crochet (English treble) on all sides 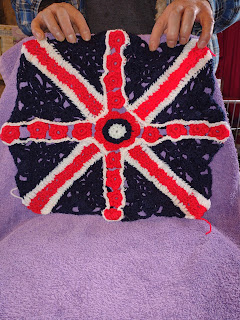 I know it isn't exactly oblong, but I think it gives a recognisable impression of the flag, which is what I was after.
So there you have it, a variety of crochet things, which were all fun to do - and I have loads more I want to have a go at!
Posted by Christine Sempers at 06:00 No comments:

The Joy of a Letter

A couple of months back, just after my birthday actually, I received a parcel of a couple of books.

A friend of ours (originally a customer, but now friend too) had sent me them, as she knew that I study and collect folklore, particularly connected to flowers, plants and trees.

She didn't know it had been my birthday, but I noticed on the enclosed paperwork, that she had ordered the books on the date of my birthday.

I was really surprised and delighted to receive the unexpected and thoughtful gift, so obviously I wanted to thank her. However I knew that she had been going through a time of particularly bad health, linked to an ongoing medical condition, and was therefore in and out of hospital. So rather than try and catch her on the phone, I decided to send her a card, with a 'Thank you' message inside, which I duly did, and thought no more of it.

Then yesterday the lady rang up and the first thing she said was how nice it had been to receive my 'thank you' letter. 'It was so nice,' she said, 'That I read it over and over again!'

I, of course, said that she was welcome and felt very touched that my simple note had meant so much to her.

When I thought about it afterwards though, I realised how letter writing and sending notes, had become far less common than it was only a few years ago.

Although Graham and I do write regularly to several friends and also send out a Newsletter to all our current customers whenever we send out a Mail Shot. I also try to make sure that anyone who puts a note in with their order will also get a little hand written note in reply.

But perhaps we are becoming the exception rather than the rule.

I thought about how nice it is to receive a letter, note or card. Anything, to be honest, which is a bit of personal contact through the post, rather than the normal bills or adverts. And also how nice it is to be able to re-read a note or letter, and keep a really good one to be savoured several times. We always put cards that we receive up on the mantlepiece, so they can be seen and also give us a warm glow when we look at them.

Judging from our friend's reaction, it made me think that I ought to make the effort to drop a note to more people.

I know we may feel in constant contact with people through social media, but there is nothing like opening an envelope and handling a letter or card. An email card just doesn't have the same effect - to be honest a written note and a card whether bought or home made, looks like a bit more thought and effort has gone into it.

It doesn't cost a lot, but it does feel nice to receive one and know that someone, somewhere has taken the time and trouble to think of us.

Posted by Christine Sempers at 05:28 No comments: