This spell is specifically for working on a Saturday with the Moon Waning:

Spell to Attract all Good Things to your Home, and Repel Evil

You will need three small magnets or three pieces of magnetic haematite, a red candle and a red pouch.

At the top of your red candle draw a small straight line, and at the bottom a cross. Take all the spell ingredients to the heart of your home and light the candle there.
Position the three magnets around the candle to create a triangle, then say:


Saturn, Lord of Earth's domain
Attract to my home all Good Things:
Peace, Prosperity, Contentment and Joy.
Cerberus, Guardian of the Underworld,
Fear, Fright and Banish all Evil from my home.
Powers of Earth, absorb all Evil influences,
Return them to their origins.
Powers of Earth, bring forth the gifts of Ceres,
Pour out the Horn of Plenty
Here in my home.
So must it Be!

Leave the candle to burn down completely - make sure this is safe to do. Then stick the magnets together and put them in the red pouch together with any wax left over from the candle.
Hang the red pouch above your front door.
If you have more than one entrance to your home you can make pouches for each of them. 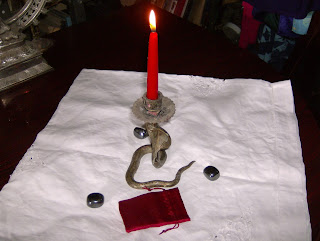 Posted by Christine Sempers at 01:28 No comments:

21st if May is one of the festivals of this very obscure Roman deity, who was worshipped on at least three dates in the Roman calendar.
On the 21st of May it was said that female goat was sacrificed to him, to avert plagues, and the phrase used to describe this means something like 'in the manner of a human sacrifice'.
Vejovis is so obscure that even the Romans were not sure what he was the god of. He is depicted on coins and in statuary as a naked, beardless, youth, carrying arrows and accompanied by a goat. Because of the construction of his name ve-jovis he is interpreted both as a youthful Jove and as Jove of the Underworld - Ve-jovis could mean the anti-Jove or the darker, chthonic Jove.
It is also thought that he may be a pre-Roman or Etruscan deity who has been carried into the classical panthaeon, but whose original function has been forgotten.
Because his function was not clear, and yet he was obviously important enough to have his own temple sited in a valley between two other hilltop groves (which was discovered and excavated in the 1930's) and three feast days, he was assigned functions based on his appearance as youthful Jove and his attributes such as the arrows, which are also associated with Apollo (the arrows of Apollo are the sun's rays, in the same way as the arrows of Artemis are moon beams). Thus in later Roman times he was worshipped as a god of healing (as was Apollo), and he was believed to have been an escapee from Hades, the Underworld kingdom of Pluto, who made it to heaven and sought refuge amongst the gods there. As an escapee, he became the god of persecuted people, those escaping injustice or those suffering because of the prejudices of the majority (sounds like a good deity for Witches!)

However, there is another interpretation which could be made of Vejovis, which looks further back than classical Roman or Greek mythology (which much of the Roman religion is based upon), to the time when it was not the male god who dominated heaven.
No religion springs fully formed into being. All religions are based on and in those which preceded them.
Islam and Christianity are based on the Jewish religion, and the Jewish religion is based on and incorporates elements from still older religions. Older religions where the Goddess was the supreme deity.
And one of the oldest stories tells of the love of the Goddess for a mortal who is the youthful tender of flocks and herds, and, for one reason or another, the youth dies and his spirit is drawn down into the Underworld. The Goddess follows him into the Underworld and through sacrifice, magic and bargaining she enters a contract with the powers of the Underworld that her lover will be allowed to live on the Earth again, but only for a certain length of time and then he will be obliged to return to the Underworld - thus explaining the apparent 'death' of the Earth in Winter and its 're-birth' in Spring.
Now let us look at Vejovis in light of this myth: Here we have a youthful god, associated both with flocks and with the Underworld. He is an archer (as was Attis, another lover of a Goddess), his arrows used to protect his flock of goats. And on the 21st of May to ensure that the flocks will grow and flourish, one of their number must be offered in place of Vejovis. This sacrificial goat fulfills several functions: it is an offering; it dies in place of the God allowing him to remain in the upper world; and it is the 'scapegoat', it dies so that plagues and suffering will not come to humanity, and it carries the sins of humanity to be buried in the Underworld.
So perhaps Vejovis should not be seen as the 'anti-Jove' but as the 'proto-Jove', the god he was before he became Jove, Lord of Heaven, King of the Gods.
Before Jove was all those things, he was Vejovis, a youthful god of flocks, who loved a Goddess, died and was reborn each year.

I really hate cold callers. I hate getting up from the sofa to pick up the phone and find it is a recorded message telling me this is a very important call (no it isn't) and that I should listen carefully.
Sounds more like an evil hypnotist: This is an important call. You will listen very carefully. Your will is not your own. You will now give me your bank details as I am a Nigerian business man who needs to put money into your bank account...
What I hate even more is picking up the business phone to find that it is a cold caller posing as someone on official business and attempting to scare me into complying with whatever they are doing.
But really the best one was the one I had who rang up yesterday:
'Hello love,' he said, 'Can I speak to the business owner?'

'You are speaking to the senior partner,' says I, 'And you have just put my back up.'

Maybe I am naive, but I would have thought that by now, 2016, it would have sunk in to people NOT to make assumptions about who answers the phone in a business situation. Because I am female and answered the phone, the caller had immediately assumed:
a) that I was a person of little or no importance in the business
and
b) that I would not be the business owner.

The caller was surprised that I had taken umbrage and protested 'I was only being polite!'

I don't mind being called 'love', I am a Northern lass and that is quite normal where I come from. What I object too, in the strongest manner, is the unthinking and implied assumption that there will somewhere be a man who is my superior in the business.
As our business is called Raven, we do still have some cold callers (and others who should know better, such as our bank) who ring up and ask to speak to Mr Raven. Sometimes, for a laugh I give the phone to Graham. He listens to them for a while then says, 'Actually you need to speak to the senior partner for that,' and hands the phone back to me.

We live in a country where there should be equal opportunities for men and women to progress equally in the work place. Women everywhere know fine and well this still isn't happening.

Redressing social attitudes is going to take a while yet.

But I hope at least one or two cold callers will be starting to get the message.