The magical fern seed, which grants invisibility, can only be gathered at midnight on Midsummer's Eve.

All evening the preparations have been going on.

There was a ritual meal of only white foods: white bread, a chicken breast, white cheese newly made and a single glass of water drawn from the sacred well.

Then the bathing, by the light of expensive beeswax candles, the curtains closely drawn against the overlooking of others and so that the thoughts could be concentrated on the magical task ahead.

Chamomile flowers were infused in the water to banish all evil and enhance the psychic powers, especially the gift of clear seeing which will be needed to spot the magical energies radiated by the plant.

As midnight neared, it was time to robe, enveloping the body in the special black garment, topped with a hood, so that the wearer can glide like a shadow across the fields and through the wood. One shadow amongst many.

On the dresser is a stack of seven pewter plates.

According to the grimoires you maybe need one, maybe seven, so in order that the preparations will not be in vain, seven pewter plates it shall be.

The night lengthens, all is still in the homes round about, all the residents safely asleep. Except in the cottage where the preparations have been made.

The door opens and the hooded figure, quiet as a ghost, slips into the night, moving swiftly, silently and with purpose.

The moon is full, casting bright silver light and black shadows. The figure keeps to the shadows wherever possible, flitting along the country lane and over a stile into the woodlands beyond.

There is pauses, beneath the gently whispering trees, listening to the sounds of the night. There are no sounds of other footsteps, not even any bird or animal sounds, just the night breeze, gently caressing the canopy of leaves allowing splashes of moonlight to sprinkle here and there.

The figure moves deeper into the woods.

There is a place where ferns grow, spread amongst the undergrowth, but tonight of all nights, one will show itself. The figure is certain of this. All the preparations were followed with care, tonight is the best chance for this magical operation to succeed.

Suddenly ahead there is a faint, blue glow. The robed figure halts, feeling the excitement, the anticipation growing. Ahead is where the ferns are growing, tonight may be the night when this magical purpose is fulfilled.

The footsteps quicken while still moving as silently as possible, through the small patches of moonlight, focused always on the blue glow ahead. And there, where the shadows are deepest, the elusive fern plant reveals its magic. Growing from this leafy plant, on a slender, almost invisible stem, is a glowing, transparent blue flower.

A flower not of this world.

In this world, ferns do not flower.

But a plant echoing the realm of the Fairy Folk. For this night only, for this moment only, the fern is in flower.

Quickly the figure takes the bag from its shoulder and takes out the stack of pewter plates, and with hands slightly trembling with effort, anticipation and excitement, holds the plates beneath the flower.

How long will they have to wait?

Not long, as all this must be done within the midnight hour.

The flower fades and shrivels and grows a more faintly glowing blue pod, a pod filled with seeds. And even as the figure watches, the pod splits open and in a puff of glowing dust, the Fairy seed are sprinkled and fade.

It seemed that some fell on the plates that were held beneath the now vanished flower. The glow is gone, the fern returns to its mortal state.

Has the operation been a success?

With slightly trembling hands, the figure carefully tips nothing from the top plate into a red silk pouch they have brought for this purpose. Each plate is treated in the same way, each plate of nothingness is tipped into the silk bag, until the final, seventh plate is also emptied of its invisible catch into the silk pouch. The pouch is closed tightly and it and the plates repacked into the bag. The figure rises and takes a last look around.

The moonlight still peeps through the leaves, but the glow is gone from the fern grove, and so to home, slipping into the cottage silently and carefully packing the bag into the dresser, then winding up the stairs to bed.

In the morning the early sunrise makes it impossible to sleep further, plus the habit of early rising is ingrained.

Was last night a dream? Or did the fern really flower in the woods?

The dresser is opened and the silk pouch quickly found. Carefully the drawstring is opened and cautiously a finger and thumb take a pinch of nothing from the pouch, which they sprinkle over their head.

And in the mirror above the dresser, they see.

Posted by Christine Sempers at 01:40 No comments:

I Crocheted a Raven!

Well, actually it was another request from a customer.

'I know how you like these little challenges,'says he 'So could you crochet me a raven?'

In the background, Graham was hissing at me, 'Say no! Tell him we are too busy!'

As I quite fancied having a go at crocheting a raven, I agreed to do it.

That was a mistake.

This was perhaps the fiddliest item I have ever crocheted. I did find a recipe for a little bird on the internet, but when I tried it out, I didn't like the proportions I ended up with. They were more for a cartoon chick type of bird, with a large head and triangular shaped body. So I put that on one side and started again.

But the main problems with this project was that I was crocheting with a small hook (3mm which is small for me) and I'd decided to use up some thinner than usual wool, and it was all done in single crochet, black on black.

There was no contrast, so following the stitches was very hard work for me. I couldn't go fast, because I was having to make it up as I went along.

When I had finally finished the main head and body shape. I then had to figure out how to make the legs and feet, as I wanted the bird to be able to stand. I had a bit of garden wire, so I cut four lengths of it so that I would have four claws, then the four wires were twined together to make the legs and the joining bit opened out inside the body and stuffed around, to try and make sure the legs would stay in place.

The tail was made as part of the body, but then I had to make an oval piece to go underneath and between the legs as it didn't look right just pulling the edges together together. Once the body was all together, I covered the legs and claws by wrapping black wool around them and fastening by holding the ends of the wool with the bent over ends of the claws - I'd already scratched myself with the wires and I didn't want anyone else doing that - and a strategic bob or two of glue.

The pointed beak was a separate piece, as are the wings, and for the eyes I used two haematite beads.

The finished raven stands about 15cm tall (6") - and don't anyone ask me to make another one, because it is not going to happen!

I took the raven outside and stood it on the edge of the bird bath to take a photo. 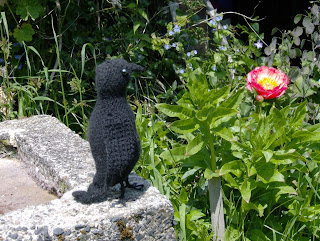 It was at this point that I noticed our peony bud had, at long last, opened!
All of April we have had a very large bud on the peony. We only planted the peony last autumn, so I wasn't sure whether it would flower this year - peonies can be notorious for not flowering, or for developing buds which do not open.
I had had a look on the internet and it seemed the buds might not open for all sorts of reasons:
Your peony might be planted too deeply - well we knew this wasn't the case because we'd checked that last autumn (and Graham had actually dug the root up and re-planted it with a growth bud sticking out of the ground), some folks said you need to plant it near an ants nest as the ants eat the waxy substance which seals the bud closed. Some folks said you should pour warm water over the bud - presumably to try and melt this same waxy stuff.
Others simply said it needed lots and lots of warm sun to make it open - and this April has been cold, grey and wet. I think we had one day of sunshine near the beginning of the month and that was it!
But over the Bank Holiday weekend we have had sunshine, and the same again today, with some good warmth and that seems to have finally triggered the bud to open.
And it was worth the wait! 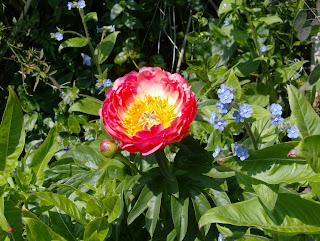