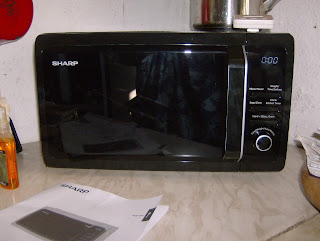 Posted by Christine Sempers at 01:38 No comments:

I've just been watching an article on the morning TV which was talking about the use of plastic carrier bags. They were saying how the number of plastic bags we use has been reduced by a vast number, but that in the UK we still buy over a billion plastic bags every year. So there was a big discussion about how could we possibly use less of them.
I sat and listened to this discussion a bit gobsmacked.
I am 62 years old, not vastly ancient, but when I was a child growing up, there were NO plastic bags. All of our groceries were supplied in paper bags. Every grocer used to have a wad of paper bags hung on a string so they could pull one off and use it at will. You bought apples or potatoes or whatever goods you fancied and the grocer popped them in a paper bag to weigh them and for you to carry home.
If you had a lot of shopping, it would be put into a paper carrier bag, or your own fabric shopping bag, or a basket. It wasn't difficult to handle, the only time you had trouble was if it was raining and you stood your paper bag in a puddle while you waited for a bus!
If you use a paper bag you are helping the environment in more than one way:
First you are saving the use of a plastic bag.
Second you are using paper which can be composted or re-cycled.
Third most brown paper bags and boxes are already made of re-cycled paper so you are saving the environment twice over!
There is nothing difficult about making bags out of paper.
At Raven the paper we use to wrap the contents of our parcels is often paper bags. The outside paper is recycled brown paper. The paper we use to print our catalogues is from renewable sources - usually wood from farmed trees. We have been doing this all the time we have been in business, that is thirty years, but all of a sudden this has become something the big companies can boast about doing. Incidentally we don't buy bubble wrap either, all the bubble wrap or other packaging we use is stuff we are re-cycling which has been sent to us with goods we have bought.
Doing stuff to help our planet doesn't have to be difficult or expensive. Sometimes it just needs a little thought.
We can all make a difference by doing our own little bits.
You don't need to superglue your chest to the road - in fact that glue is probably really not helping the environment!


Posted by Christine Sempers at 05:20 No comments: