You remember Graham was looking a bellows?
Well, with our son's help, bellows were selected and ordered online (together with a metronome - no he is not musical, unless you count the trump-et involuntary - and stamp hinges (the one birthday present I have specifically asked for.)) 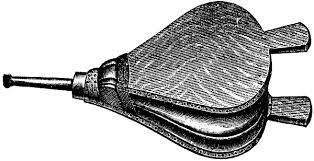 But when the bellows arrived today, they were not bellows as I was imagining.You know, two wooden paddles joined by leather/plastic and a pokey end where the air gets blown out. No, this is an altogether more 'boys toy' kind of bellows.l Well actually, technically, they aren't bellows at all. They are, or it is, a 'barbecue fan'. In matt black plastic and looking very like a 1920's gangster's Tommy Gun. You hold it in one hand and the other turns a handle as quickly as you can manage which blows out a constant stream of air.
None of this blow air out, suck air, dust, smoke and ashes in!
This wonder of modern technology was also under £3! Making it incredibly good value for money - and effectively silencing my thoughts on expense (they were actually cheaper than my stamp hinges!).

Graham is now downstairs, happily blowing at the fire with his bellows gun. 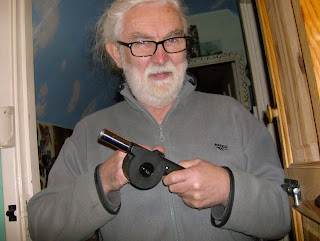 On the breakfast news today, the lead story appeared to be that there is a shortage of iceberg lettuces.
Now either there was very little happening in the news today, or this is a clever marketing ploy. Somehow I suspect the latter:
'How can we get the customers to buy lettuces in the depths of Winter, when it is freezing outside and blowing a gale? I know! We'll say there is a shortage of iceberg lettuces! People are always daft enough to panic and bulk buy if we say: 'Don't Panic! If we all buy sensibly, there will be enough iceberg lettuces to go around!' Oh and to make sure people understand there is a shortage, we will ration the lettuces. Customers can have no more than three iceberg lettuces.'
Now, I don't know about you, but if I were to buy ONE iceberg lettuce it would last me a week, or maybe two, or at least until it starts to dissolve into green goo in the salad box of the fridge - probably three weeks is my estimate.
I cannot see any circumstances where I would ever feel the need to buy THREE iceberg lettuces.
'Aha!', says the spokesperson from the salad vegetable growers association, 'But it takes seventeen weeks to grow a lettuce. So even if we plant more lettuces now, it will be seventeen weeks until we can harvest them.'
Well, frankly, I think I can wait seventeen weeks until I can buy an iceberg lettuce - that would make it the middle of May. 'Cast ne'er a clout till May be out', oh well, better give it a few more weeks to be sure.
To be honest I think it is more than seventeen weeks since I bought my last iceberg lettuce. And so far, it being February and the coldest part of the Winter and all, I really do not have the urge to swap warm soups and stews, chips and fish finger butties for the delights of salad, no matter how high it is piled with iceberg lettuce.
So if anyone is worried that they may be running short of iceberg lettuce, you can tell them wherever you shop, that Chris said you can have hers.


Posted by Christine Sempers at 02:58 No comments: