So what do you do on a Bank Holiday Monday, when the sun is shining and it is a lovely day to be outside?
Do you? Well I have been inside making books.

Actually this is a job I like to do either at the weekend or on a Bank Holiday, because it is a job that always takes longer than I expect it too, and during the week I feel under pressure to get on and deal with orders to get as many out as possible. There may only be one or two orders actually waiting for these books, and we can often send out the bulk of the order with just the odd book 'to follow'. But eventually the job has to be done, and today was it! 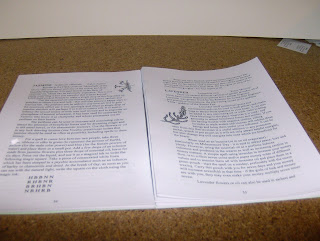 I had printed out the pages and covers for the books during the week, double sided A4 sheets of paper, which have to then be cut in half to make a larger pile of A5 pages, with card covers, and of course the pages have to be in order too. 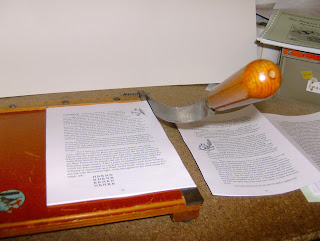 We use a small, antiquated guillotine which I got from a Boot Sale years ago for the princely sum of £3.00 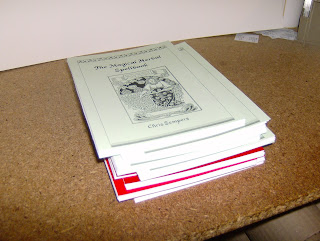 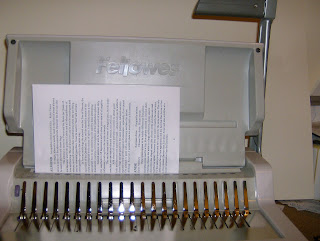 Here are all the book pages. Each little pile is a single book, but of course all the pages are currently loose .


These books are being comb bound, and the fab machine we use will first punch all the oblong holes down one edge of the pages. Of course you can only stick around 10 pages in at a time, so you have to be sure you are punching the holes in the right side of the pages, and that you lay them down correctly on top of the ones you have taken out, so that the pages stay in the right order. 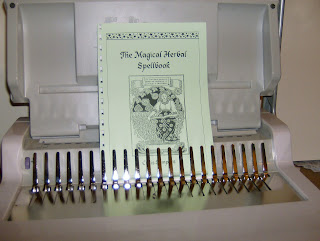 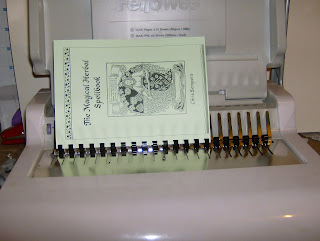 Here the plastic 'comb' is being inserted through all the holes in one go. This can be fiddly to do, and you often find when you look at the back of the book that not all the ends of the 'prongs' of the comb have gone through all the pages.
This job needs both patience and attention to detail - and the ability to wriggle a recalcitrant prong through a hole only just big enough for it. 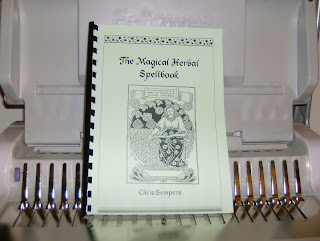 There we have the finished comb bound book.

And below the results of an hour's work, ten books nicely comb bound and ready for sale. 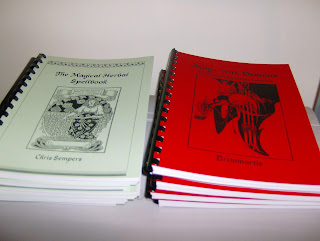 Posted by Christine Sempers at 02:49 No comments:

Where Has all the SF Gone?

22nd of Aug is the the birthday of Ray Bradbury, which of course made me think about all the fab stories he wrote.

Throughout my teens and 20's I was a great SF fan, well science fiction and fantasy too. I had lots of favourite authors, because there seemed to be so much SF out there: Isaac Asimov, Anne McCaffrey, Harry Harrison, Roger Zelazny, Larry Niven, Ursula Le Guin, Fritz Leiber, Robert Heinlein, Tanith Lee.
I loved the alien landscapes and alternate views of the universe they gave. I loved the way they stimulated and expanded my own imagination and there seemed to be so much endless variation within SF from straight adventure, to extrapolations on current scientific discoveries, to flights of pure sword and sorcery fantasy.
I read of Elric of Melnibone, the exiled albino prince of a dying world - and by the same author (Michael Moorcock) I still love the Dancers at the End of Time books. Moorcock was a prolific author who wrote at a ferocious rate, a book a fortnight at one time, as if the stories were crowding through him, desperate to flood into the world. He was not afraid to poke fun at his own characters either, with Elric at the End of Time, being deadly and depressedly in earnest while the Dancers merely create battles and love affairs for their own entertainment and to fill the emptiness as they wait for the end of time. They try to cheer Elric up - a lost cause, of course - by giving him enemies to kill and epic battles to fight, then go home to tea.
For pure fun and entertainment you could not fault Terry Pratchett, who had the ability to point up glaring faults in society and 'progress', inequalities and prejudices, while at the same time showing how crassly stupid these are.
Ray Bradbury was the master of weird and macabre fantasy, but without descending into stomach churning gore. His stories piqued the imagination and recognised that sometimes our own imaginations can create a greater horror than those hammered home with bloody spikes by other authors.
He was friends with Charles Addams, author of the Addams Family, and there are sometimes similarities in some of their ideas, the playfulness mixed with the grotesque, the families who see themselves as perfectly normal, which to us are both weird and scary.
I remember a story in The October Country where two uncles run the local funeral parlour, where they drain the corpses of blood, and take the blood home for their family to drink. These are thoroughly modern (ish) and practical vampires, pillars of the local community and existing in plain sight with none of that nasty neck-biting - so last century. And the young son, the runt of the family, who cannot drink blood because it makes him sick, and has none of the magical or psychic powers of other family members, but his mother loves him.
Golancz used to be the publisher I searched for in the local library, with its distinctive primrose yellow book covers. They introduced me to so many authors. So many different styles. I didn't like them all, but some I adored (and still do).
So where has all the sci fi gone?
I used to be able to buy it in Woolworths, shelves and shelves of paperback books with their, literally 'out of this world' covers showing strange planets and double sun rises. Twenty years ago I joined a SF and Fantasy Book Club and what a disappointment that was, the only SF on offer were stories based on Dr Who, Star Trek or Star Wars, the rest was all Fantasy. Has SF fallen so far out of favour that authors cannot write anything new, only add to existing franchises?
Saddly my own collection of SF paperbacks vanished in a house move years ago, so all I have are memories.
But, Oh! what memories !


Posted by Christine Sempers at 02:59 No comments:

This is a translation from Papyrus Anastasi III :

Praise to you, Lord of the House,
Holy Baboon with shining mane and pleasing figure,
gentle, charming, loved by all.
To him belongs contentment, for he is Tehuti
Who overwhelms the Earth with beauty!

His headdress is red jasper
His phallus is carnelian
Love gushes out of his eyebrows
and he opens his mouth to give life.

My home is sweet, since the Holy One entered
It has flourished and grown since
My Lord set foot therein.

May all receive his blessings
Be happy for me, my friends,
Behold my Lord! He has made me what I am
and my heart belongs to him.

O Tehuti, with you as my champion,
I will fear nothing
Posted by Christine Sempers at 03:19 No comments: