After living in our (rented) home for thirty odd years, with single glazing, no central heating and one coal fire in the living room, our landlords have decided that we are to have double glazing fitted.
They did ask us if we had any objection, which was nice of them, but as they are spending the money and it is their house we didn't think it would be right to object to it. Besides which we are told that it might make the house a bit warmer - and we could certainly do with that in the Winter!
The first chap who came to look at the house for the new glazing, before Christmas, told us it was up to us which windows and doors were replaced, which surprised us, but sounded good.
Our main concern has always been that we like our back door. It overlooks the back garden and has a large pane of clear glass in the top half, so you have a good view out, so we can watch the wildlife and also the dogs. Also we have a large dog-flap in the bottom part so that the dogs can come and go as they please, and you don't have to be up and down constantly letting them in and out.
About a fortnight ago we had a second visitation, this time from a chap who needed to be inside to measure the windows and door(s) for the final fitting.
Now this chap did not like us, our dogs or our decor (distinctly 'witchy') or the coloured bottles we have in the windows. 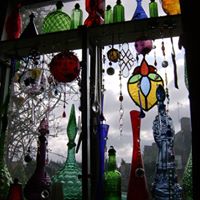 The only thing he actually said to me and to Graham, twice each, was that EVERYTHING needed to be taken out of the windows. EVERYTHING, do you understand? EVERYTHING.
So we got the impression that the windows needed to be empty, but he was such an unpleasant chap, we didn't feel able to ask any questions or mention what we actually wanted eg to retain the back door.
The only thing I got out of him that it would be around a fortnight until the actually fitting of the windows.
But we had concerns after watching him measure EVERYTHING that what we wanted was not going to enter any of his equations.
We told our son about the meeting and as his job is a building construction manager, he pointed out that as we have an open fire we need trickle vents in the windows and the phone junction box in the front window can't be moved by us, so he got in touch with the landlord's agents and spoke to them. They again confirmed (and also confirmed with the landlord) that if we don't want a back door fitting, we don't have to have one.
So the window fitters are due on Thursday - so will we get to keep the back door? Will they have a hissy fit about the front window with the phone stuff?
Will Bridie run away from home? will we be able to keep Tallulah from jumping all over them in a happy manner?
Will the bottles make a triumphant return to the windows?

Posted by Christine Sempers at 02:40 No comments:

Posted by Christine Sempers at 00:29 No comments: