And Then There Was One

Well we knew it was going to happen.

Angela had a hospital appointment in the area last week, so called in to pick up the three sable babies and take them off for new adventures.

So now we are left with Tallulah and our little Black Betty, or Betty Boo. She is a little sweetie (although not as cuddly as Singer, he will be a lovely and loving companion for some lucky person).

Angela said all the puppies were pretty, but as soon as she saw Betty, said 'That one is Show quality.' which made me feel a bit guilty for picking her as the one we would keep. 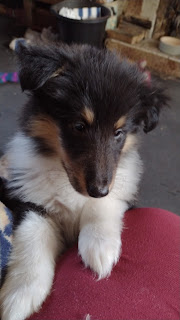 We took Betty to be microchipped on Monday. Graham carried her into the vets expecting this to be a quick, in-and-out visit, but it was a bit longer than expected, as all the staff had to come and say 'Aaawwww!' to Betty.

She was duly microchipped, had a vaccination and was examined by the vet who pronounced her fine.

To be honest, Angela had seen her and she would have spotted if anything was amiss. In terms of collies I reckon Angela (from Wicani Collies) is the fount of all wisdom, and probably knows more about the breed than a vet would.

Anyway, now we are down to Betty and Tallulah, things are a bit more settled, and rather a lot less frantic. There is also a heck of a lot less crap and wee everywhere.

We have rigged up a fenced off area outside the back door, so that Betty can now get outside whenever she fancies (although 'outside' is HUGE to a small puppy, so that is taking a bit of getting used to). We also hope to encourage her to understand that crapping is an outdoor activity - rather than going upstairs to do it under my chair in the office!

Tallulah is also encouraging Betty to play with her. Tallulah dangles a toy in front of Betty, until Betty gets hold of it, then gently drags Betty round the room, allowing Betty to have a chance at pulling back too.

Tallulah has been a fab mum, and still is showing to be so. 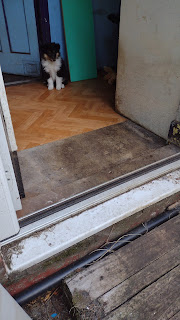 Ooooo is that 'outdoors'? 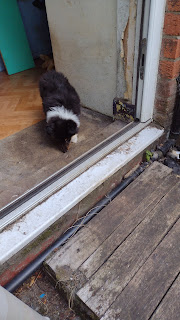 It seems a big place 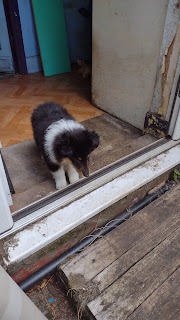 Can I get over this HUGE step? 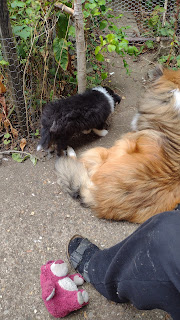 Posted by Christine Sempers at 01:46