Nature Notes from a Witches Garden

Whether we are in lockdown or not, nature just carries on doing its own thing. And it certainly is around our garden!
Just outside our back door is a cotoneaster bush which is a fantastic place for wrens which we often see hopping in and out. But it has also become a potential nesting site for our robin. He likes the new hazel arch/pergola/tunnel which Graham recently constructed and flies around trying various vantage points.
We are pretty sure our robin is a 'he' because he seems to be trying to tempt a female to come and build a nest with him. The other day he was in and out of the cotoneaster, but always carrying a piece of nesting material in his beak, as if saying 'Hey girl(s), look at me, see how good a potential mate I am, making this nest ready for you!' However he wasn't building a nest, then going to fetch more material, it was always the same piece he was carrying about.
The pigeons on the other hand definitely are nesting. Right behind our coal bunker is an old elder tree, almost smothered in ivy. This seems to be a popular configuration, as we had a similar tree at the back of the garden, which finally gave up the ghost and collapsed last year and that had been a nesting spot for pigeons for years. So this year they have decamped to the new nest site in the ivy covered tree by the coal bunker.
We can see them from our western living room window as they land on top of the tree then shuffle in amongst the ivy.
But they are not the only pigeons in the garden. There is another one in the front garden, and it seems to be less experienced in picking the ideal nesting spot, as it has chosen the jasmine bush right by the side of the front door.
Now, this has several disadvantages that I can see: First there is not a lot of cover on the stems it has chosen for its nesting site. But the main 'fail' element is that it is directly by the front door, so every time the front door opens, the pigeon is disturbed and flies off with much noisy flapping. Or if the postman or a delivery driver comes up the front path, the bird explodes out of the jasmine and away.
But it is still persevering.
I often see it pausing on the edge of the bird bath, with some improbably long twig in its beak, which it flutters off into the jasmine with.
I like watching nature in action. I love to see the wild life, where it belongs, out in the wild.
The emphasis here is on the 'out' bit.
So the other day, sitting at the living room table, I happened to notice some ivy on the top shelf of the nearby bookshelf beneath the window, and thought that it must be a piece left over from the christmas decorations. I pointed it out to Graham who went to have a closer look and found that no,. it wasn't plastic, it was real ivy growing up the inside of the wall!
Graham pulled out the ivy, then shot outside and round to the back window to where we know we have some ivy growing on the outside wall. He found two airbricks and both had ivy growing into them.
There followed much scrabbling about and removing of ivy!
Not all stuff is growing in the wrong place though.
Since Graham built the new garden arch/pergola/tunnel, we decided there was a small but wasted area which would make a nice flower bed just by the back door. So this week he has transferred some ransomes (wild garlic) from the side garden into the new flower bed. He has also dropped some wild flower 'bombs' into the same area, so hopefully we will have a profusion of wild flowers later on.
Anyway, the ransomes are in flower, and very pretty they are too. But not only pretty, they are surprisingly tasty.
Pick one of the white, star-like flowers and pop it in your mouth. You will be surprised at how honey-sweet it is, then as the honey fades, the warm mellow taste of garlic starts to build.
These flowers are lovely scattered on salad, but also on roast beef or chicken.
If you are growing them or any other flowering alliums in your garden, do have a taste of them.
This is a seasonal treat not to be missed. 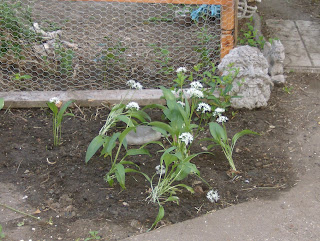 Posted by Christine Sempers at 00:32