Crocheting in the Garden

It was another beautiful day yesterday, so after lunch Graham and I descided to take our mugs of tea out into the garden. I took my crocheting with me as well, so Graham was in charge of the tea.
The grass in the front garden in nice and flat to Graham put the mugs down beside him as he sprawled there. The dogs took the opportunity to peer through the front gate and bark at the neighbours in a happy way.
So there we sat in the sunshine, chatting, watching the bees in the cotoneaster, Graham drinking his tea while mine cooled on the grass beside him.
Until he said, 'Looks like you won't be getting your tea.' Because there was Bridie with her head stuck in my mug, having a good long drink of my tea. In fact she drank the lot, then looked at Graham as if to say 'Have you left any for me?'
We have a new little flowerbed at the right of the front door, as you come out of the house. We had bought some new plants (mail order) and then had to find somewhere to put them. There are some lavender plants and one or two others. 'The Pudsey is doing well.' said Graham.
'Pudsey?' said I
'Pugsley?' said Graham, 'Something beginning with 'P', I think.'
'Peony!'
Yes, we have put a peony in the new flowerbed. It arrived as a piece of root, with a tiny bud showing at one end. Graham planted it, then we read on the internet that one of the mistakes people often make when planting peony is that they are planted too deeply. So Graham dug it up again and planted it barely under the surface of the soil, and in a couple of weeks, it has started to push up leaves. We don't expect it to flower this year, I think it is far too late for that, but we are pleased to see that it is alive!

When I am crocheting, I don't always work on huge projects (although I do like to have something on-going). So here are a couple of my latest pieces: 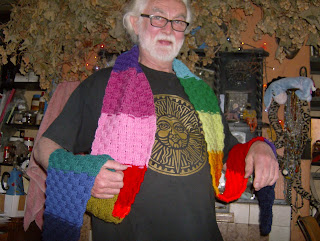 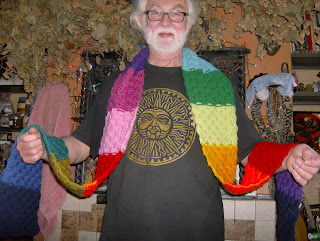 Graham fancied a long, colourful scarf and he particularly likes the 'basket weave' stitch, which is thick and dense. So here is the one I made for him. Of course it is no use until Autumn/Winter.
Then I was sat one night and my toes felt cold, so I thought I'd have a go at making myself some crocheted slippers. 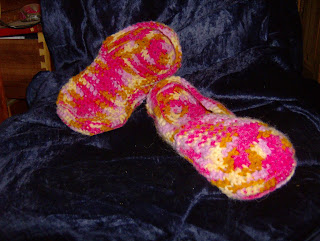 I have used one of those wools that changes colour to give the variagated effect. I didn't use any pattern to create these, I just descided to have a go and started crocheting.
I started with a spiral, which I knew would become the sole at the widest part of the foot, then created the rest of the sole by crocheting rows until I got to the right length - I used one of my shoes as a template and measured it against my foot too. When I felt that the sole was the right size, I simply worked rows around the outside edge without increasing the stitch number, this gave a 'boat' shape which I then crocheted across from side to side to fill in across the top of the toes. I had thought about continuing up and around the opening, to make more of a 'boot' shape, but for the time being these are just what I needed.
I think I made the slippers in an evening, so it didn't take long at all.

Posted by Christine Sempers at 01:42