This last weekend we were looking after Charlie.

Charlie is our son's family dog. She is a very new addition to the family as they have only had her a month and she is only four months old. She is known as a Double Doodle as she is a cross poodle and cocker spaniel, crossed with another the same. Our daughter in law is allergic to dogs, but they thought it would be good for our grandson, Eden, if they had a dog, and as poodles and poodle crosses do not shed hair, they would be a safer bet to not bring on Cherise's asthma.
So Charlie was added to the family.
She is a sweet little thing, but INCREDIBLY energetic, she is constantly on the go .... or asleep! There is no in-between state. The other slight problem with Charlie is that she is not fully house-trained yet. If there is a newspaper on the floor, she will generally try to aim for it, but hasn't fully got the idea that dogs go outside to have a wee etc.
Anyway Mike and his family were off for a long weekend break near Blackpool, and the caravan they had booked, looooong before they had even thought of having a dog, did not take dogs, so they asked if we would mind looking after Charlie, and we (of course) said 'No, problem!'
Charlie had visited before, and we know that Tallulah, in particular loves chasing round the garden with her - and Bridie does occasionally join in too. So Charlie was dropped off on Friday afternoon and the fun began.
Imagine a houseful of overexcited children - now quadruple that - and remember that one child has toileting issues.
Actually they spent most of the afternoon in the garden even thought it was raining on and off all day. Eventually Tallulah was so knackered she came in, followed by Charlie who was not in the slightest tired out. Tallulah collapsed on the living room floor and Charlie bounced all over her. When she realised there was no joy there, she tried getting a rise out of Bridie. But Bridie is an older dog, and has dealt with puppies before so she snapped at Charlie and Charlie decided to play with a squeaky ball instead. 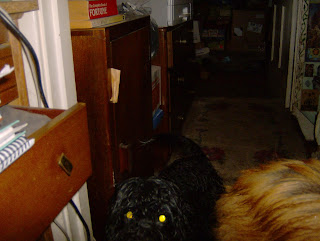 Eventually bedtime came and Charlie's bed was put near the open door in our bedroom, as we'd been told she was used to sleeping in Mike and Cherise's bedroom. The lights were put out and all was quiet for at least thirty seconds, then we heard the sounds of small doodle galloping down the stairs. There was a yap from the living room, then silence and we fell asleep. We were woken about half eleven by the sound of something bumping about underneath the bed, the bumping continued until a small dog emerged at Graham's side of the bed and began raiding the waste paper basket for tissues.
Small dog was retrieved and removed to the other side of the bed again.
Most of the rest of the night was fairly peaceful apart from the galloping up and down stairs of various dogs in various combinations.
Actually the rest of the weekend was a lot more peaceful. They got over their excitement and Charlie calmed down a lot. She also quickly got the hang of the dog flap, especially with Tallulah helping her. Tallulah would go through, Charlie would bark 'Where have you gone?', so Tallulah would pop her head back through the flap as if to say, 'Here I am! Come on!' and Charlie would push at the flap.
It wasn't long until she was barreling through it at full speed and at every opportunity.
We didn't get the toileting issue sorted completely, but it was obvious that Charlie was doing at least some of it outside, although she would still gallop downstairs, have a quick pee in the living room (hopefully on the strategically placed newspaper) then shoot outside.
Charlie has been attending training classes, so she does 'sit' very nicely and waits to be given a treat. And she is a very good natured dog, if occasionally noisy - but so is Tallulah so we can't complain.
Charlies visit also gave both of our two a good lot of extra exercise, which can't be bad.
So all in all, we would be happy to doggy-sit again (especially when Charlie has figured out that outside is where the doggy toilet is!) 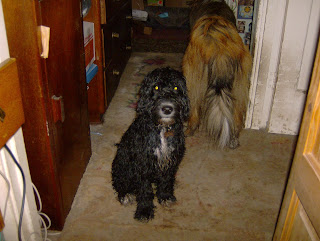 Incidentally Charlie has black eyes, but the flash made them come out luminous yellow - well at least you can see them!


Posted by Christine Sempers at 10:28