OK, so I knew this bedspread was going to be made up of various crocheted elements, which would have to be connected together in different ways.
There would be similarities to patchwork, applique and embroidery, but first the basic background had to be constructed. Here I was on fairly safe ground with my squares and triangles, although I didn't want the 'fields' to all be the same size and shape or even texture. I wanted there to be a random element in there, as there is in a landscape of fields.
When you look at fields, they may be vaguely square or oblong, but there are always odd corners or boundaries which run alongside a river or road which can make edges strange shapes. Or maybe a copse of trees has been left in the middle, or a pond in a corner, or a wide margin and high hedge left wild for small birds and creatures.
I wanted to reflect these things in my design. Also this bedspread is not intended to be a photo of a real place, but a landscape of imagination and magic, so I could use colours for the 'fields' which you would never see in this world.
As for the outside edge .... Well, I wanted this to represent the sea surrounding my magical island, so blue, or a variety of blues seemed obvious. Then a friend who does a lot of crafts and needlework told me she was crocheting a tablecloth for one of her daughter's dolls and was using a kind of wavy stitch and sent me a picture to look at.
Wow! That was just what I needed for my wavy sea!
Oh heck! This looked exotic and scary - but I would have to have a go at it.
I found a tutorial video on Ripplestitch and with much pausing, backtracking and taking notes, I managed to write a recipe in terms that I could understand, and would be able to follow (I hoped).
I decided I wanted my 'sea' to be dark and light blue, but also include white for the froth on the breaking waves. Also when you look at waves, they don't all break at the same time, a chunk of wave will break, then a few seconds later another piece further along will break, so it is not an even pattern.
To try and evoke the feeling of these moving, randomly breaking waves, I made the edge pieces in various lengths, moving the colours around from piece to piece, so that no two adjacent sections would have the same colours matching up.
Now I know that people who are experienced at this kind of thing would probably have just made the whole thing in one continuous strip and just kept swapping from one colour to another. But as a complete novice I had to do this in chunks I could get my head around, and as one who up to this point had only known the most basic of stitches (chain, English Treble crochet and slip stitch) trying Ripplestitch was one heck of a step up for me.
So off I went, crocheting piece after piece of blue and white rippling sections of 'sea'. 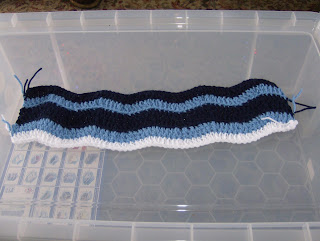 A piece of ripplestitch sea 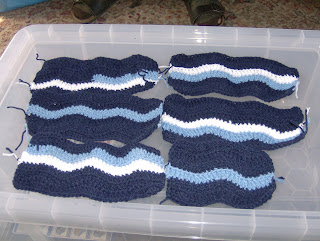 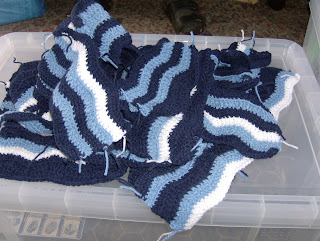 Lots and LOTS of pieces of ripplestitch sea! Phew!

The video I used was by Bella Coco on You Tube

Posted by Christine Sempers at 01:30