Once I had made enough 'sea' to go around three sides of the finished bedspread (I'm aiming on a size that will suit a double bed), I could now start on the fields.
Well, to be honest that isn't strictly true as I had already done a few squares and triangles as light relief from the 'sea'. But now I could concentrate on making lots of different 'fields'.
I had a vague idea of how many I might need, but I also knew I didn't want them all to be exactly the same size, as I wanted them to reflect the randomness of fields in the countryside. So I couldn't say exactly how many I would need.
Never mind, I now had LOTS of wool, and I was enjoying myself. It didn't matter if I made too many as I could then pick and choose the ones I liked best, or which fitted nicely together. I also knew that as they were different shapes and sizes I was going to have odd shaped holes, which I would have to create special shaped pieces to fill.
Also as I had managed the Ripplestitch pieces ok, this had built my confidence and I could have a go at being more creative with the stitches I used.
One of my problems is that I have a brain that flits from thing to thing. If I do too much of one thing I will get bored, and I wanted to make this enjoyable, creative fun all the way through. So I knew I would have to allow myself diversions rather than grinding out field after field. 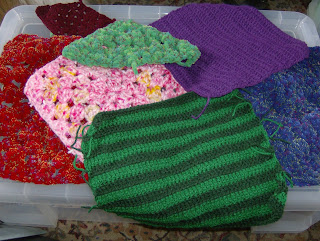 Off I went, back to the internet to find a pattern for a SIMPLE flower I could have a go at.
It needed to be a video for absolute beginners, so that I could pause it, take notes and back track several times to see how it was done, and make it go into my head and stick.
What I found is that there are HUNDREDS, maybe THOUSANDS of of tutorial video's out there.
And as for 'Simple' flowers .... wow! there were loads.
Before my head exploded and I got overwhelmed by the vast amount of info I now had access to, I found a tutorial for a Simple Five Petal Flower from Bella Coco again. Just what I wanted. It looked easy, the lady spoke clearly, explained it simply and showed you exactly what she was doing.
I took notes, watched it several times until I was sure I understood what she meant, then went off to have a go.
I was going to need lots of flowers in lots of colours. Yay!
But it didn't matter if they weren't all exactly alike, or if they were a bit wonky, nature is wonky in parts so it would be ok. 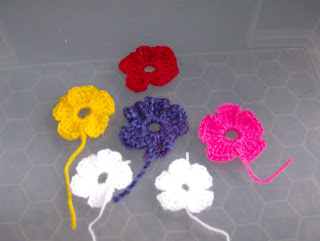 Posted by Christine Sempers at 03:10