We have been waiting, Waiting, WAITING! for our very pregnant Tallulah to have her babies.

In the last couple of weeks her nipples have got big, and she has even developed some definite boobs! Last week she began to leak milk, so we knew (hoped) things were getting close.

On Friday morning (10th of June) Tallulah was definitely very restless, moving around the house but not settling. We did wonder when we popped out to do a quick shop, if we would have babies when we got home.

But no, just a very pleased to see us Tallulah.

As the afternoon wore on, she again grew restless and began nesting in various places upstairs and down.

She tried the sofa, her dog cage, upstairs in every room, downstairs again in various places around the living room. Eventually in the evening she wandered upstairs again and we could here her nesting in the games room (where we have our gaming pc's) under the spare bed.

Getting on towards 9pm Graham went upstairs, just to check on Tallulah, as things appeared to have calmed down and gone quiet. When I heard him shout 'Chrissie! Babies!'

I hurried up to join him and saw two squirming puppies, obviously very newly born. But Tallulah was doing all the necessary things she was supposed to do: breaking the birth sacks, washing them to stimulate breathing, chewing through the cord and eating the afterbirth.

We were gobsmacked and took some photos to send straight to Mike.

We stayed with her for some time, then went back downstairs as she seemed to be doing fine.

At about 11pm we went up again, and two more babies had appeared. Again mother and babies all seemed to be doing well, so we left them to it and decided to try going to bed. Even though, like children on christmas eve, we were too excited really to think of sleep. We left the landing light on, so there would be enough light to see by should anything need doing.

We hadn't been in bed long, when Tallulah decided to change location and appeared in our bedroom, carrying a baby. So Graham went and fetched the other three. We all settled down and things went quiet, and Graham and I managed to fall asleep for an hour or two.

When we awoke we found that sometime during the night, Tallulah had had another two babies, but saddly at the same time she had laid on two of the puppies and they were dead, when she stood up. I felt so guilty that two of the babies had died, but when I spoke to Angela later, she said it was something that every breeder would experience sooner or later. It is never easy, but it happens.

So we still had four very vocal live babies.

In the morning we moved mum and babies downstairs into the puppy cage, so that they can't roll all over the place as they seem to be determined little explorers. I've been surprised how much the puppies move about!

We thought originally that we had one boy and three girls, but it might be two and two, hopefully we will be able to get a proper look as they grow a bit.

And from the amount of licking Tallulah does, they are going to be some of the cleanest puppies ever! 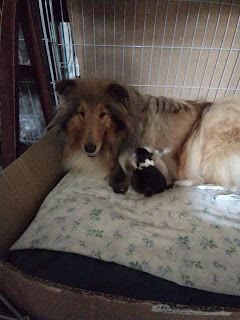 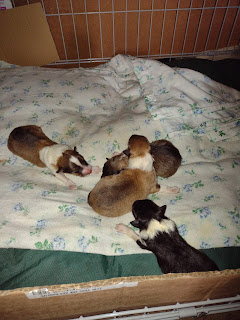 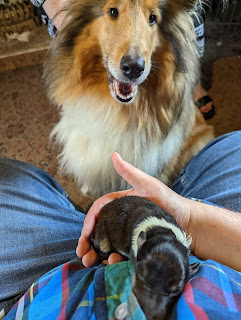 Mike took the bottom picture on Sunday when he visited with Cherise and Eden, who had been longing to see the puppies!

Posted by Christine Sempers at 22:30