Very often things don't happen as you expect.
We all hope that things will run along smoothly without too many hiccups. But sometimes life just goes 'HERE YOU ARE!' and you get a whole load of stuff in your face all at once.
Earlier this year Bridie had a bout of illness, not eating, panting, heart pounding. We were really worried. Then we realised she was having a panic attack because she had nibbled at one of her feet until it bled, and surprise surprise, it was hurting!
So she spent the next week or two wearing a sock on the offending foot, got better and we thought no more about it.
Until she had another episode. Which we also put down to a panic attack - Bridie is a nervous dog, any sudden noises and she will shoot off like a greyhound.
But we also noticed she was getting slower when walking, and even avoided going out for a walk on a couple of occasions.
Anyway the not moving, not going out, and also eating less and having to be tempted to eat .... I think you can see the way this was going.
In the meantime Tallulah is the life and soul of the party, full of life and curiosity, and at the begining of this week we noticed that she was coming into season.
I rang Angela, our friend and collie breeder for some advice about the possibility of having a litter from Tallulah, as we had spoken about this a couple of years ago (pre-Covid) when we collected this lively puppy from Angela.
Angela gave me a master class in 'how to spot if a collie might be ready for mating' - apparently there is a four day window of opportunity and you have to be ready to grab it. Now normally Angela would have Tallulah to stay with her, so that Angela could be ready to seize the moment of greatest opportunity. But as luck would have it Angela had a mother collie and puppies in the house and another in the puppy house, and was also preparing for a dog show this weekend, so I was given detailed instructions in what to look out for and ring Angela when things started to change with Tallulah.
At the same time, Bridie was getting worse. At first we put it down to the heat, as we have suddenly had a temperature jump of around 10%, and gave Bridie a lukewarm bath, which she seemed to enjoy and perked her up a bit. So much so that she had a couple of slices of chicken breast, but no more.
We had to face the fact that Bridie was nearing the end of her time on Earth. And finally this morning we made that last trip to the vet with her.
And at the same time when we got home we realised that Tallulah was showing the signs of the door of puppy opportunity opening.
So I rang Angela to tell her of Bridie's passing, and Tallulah's readiness (we think).
So this time it really is one door closing and another one opening and spirits passing in both directions.
Life and death, death and life, two sides of the same coin.
Of course we are mourning Bridie, how could we not?
But really the cycle of life death and re-birth could hardly have been pointed out to us more graphically. 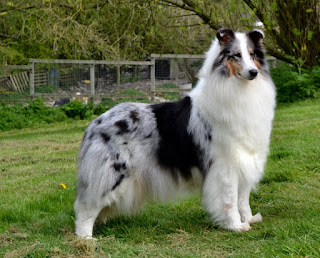 Posted by Christine Sempers at 03:16