I have mentioned that I have been doing a bit of crocheting recently.
I haven't done any for years. The last thing I made was a throw, which was basically a spiral square, where you just add another colour in and go round and round and round until you either run out of wool, or the square is big enough.
And crocheting squares was really the extent of my crocheting knowledge and expertise.
Then a few months back I had the opportunity to buy some very cheap wool - a local shop was closing down and selling off all their stock. Now the colours were limited, the choice was purple, black and white, so I bought all the purple and black I could and carried it home in triumph.
I had fancied a poncho, but couldn't find one I liked for sale, so thought this was an ideal opportunity to have a go at making one. The only problem was: I could make squares, making two triangles to fit together was way out there! This was quantum crocheting, as far as I was concerned.
So I had a look on the internet and found a lovely tutorial on how to make a simple triangle. I watched carefully, took notes and had a go, and found that this was as easy as making squares.
I had more black yarn than purple, so I used the purple to make pattern elements, and I am very pleased with the result.  (Graham decided to help me display my finished stuff) 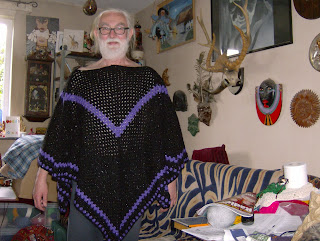 I felt so chuffed with the result that I wondered if I could make other shapes based on the same simple principles, and decided to try hexagons for a start. These are a bit more complicated and were more fiddly than I expected. But I was having a bit of a play and an experiment - and basically using up the remaining wool.  (Man, the Mighty Hunter modelling hexagon wrap) 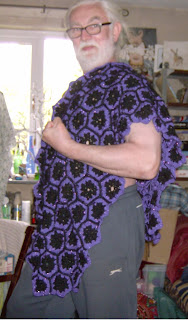 I really enjoyed the crocheting, and was pleased with the results too, so I thought I would like to carry on and make more stuff.
So when we went to the Humber Bridge Farmer's Market, there was a stall selling all sorts of big balls of brightly coloured wool (yarn) and I fell upon it like a starving chocoholic on a box of Mars Bars. I bought one of lots of different colours, then Graham picked out a few more. So we ended up with a bag full of brightly coloured yarn.
'What are you going to make?' asked the lady on the stall.
'I don't know.' I replied truthfully

The crocheting world is my oyster!

I also made a shawl, which I wasn't going to mention, but my lovely assistant insisted on displaying it for me 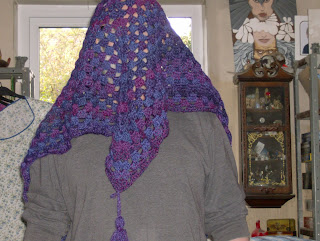 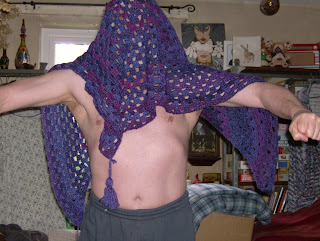 The bottom pic shows off the tassle ....


Next time - The Project!


Posted by Christine Sempers at 02:10