At this time of year there are many flowers in bloom, and in our front garden we have a particularly magnificent clump of aconite, known also as Wolf's Bane or Monk's Hood.
This is a wonderful deep blue and has spires of flowers all with their distinctive hood shapes. Because it is such a beautiful flower it often finds its way into table decorations at weddings, often without the florist realising that this plant is extremely poisonous in all its parts. 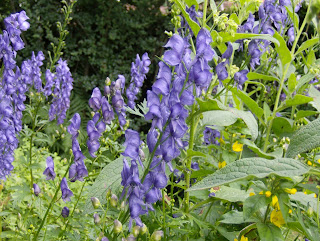 Aconite can be tricky to get going, but once it has settled it will come up year after year. However be careful as this plant should only be handled while wearing gloves as it can make itself known even through unbroken skin.
Interestingly the antidote to Aconite is Belladonna, another extremely poisonous plant, and both were used together in many recipes for Witches' Flying Ointment.
Aconite juice was used by many ancient cultures as a hunting poison, to coat the tips of arrows, and it has been speculated by many including Dr Margaret Murray (author of 'The Witch Cult in Western Europe'), that this was the poison used by the fairy folk, the indigenous tribes of Britain and Ireland, to coat their elf-shot. Thus making their arrows particularly deadly.

Posted by Christine Sempers at 05:29