We have just got back from a quick trip to the shops - bread and milk were running low, and we fancied a little trip out anyway. Or as Graham would have it the pile of christmas food had diminished to slightly less than mountainous, so we had to stock up the lower slopes again.
On our way into Hessle we have two supermarkets we visit just across the road from one another. Aldi at one side, and Sainsburys at the other.
We turn off the dual carriageway, and turn left climbing on the road which bridges over the railway line, and there we head for Aldi's on the right side of the road. And Graham says to me, 'What are all those men doing with big camera lenses?' And sure enough, on the left pavement, beneath a leafless tree, are a cluster of greater-coated, bird spotters. Cameras at the ready and pointing up into the tree where a number of nondescript small, greyish birds are perched.
We turn right and down the hill into the almost empty Aldi's car park.
Almost empty but for another and larger flock of greater-coated and flat-capped bird watchers. This group appears to have even larger camera lenses then the previous lot. Some even have tripods, and one chap has a portable camouflage cloth with him, but the camera is already camouflage colours.
Their attention is trained on a rowan tree, heavy with yellow berries, where more of the smallish, nondescript greyish birds are grabbing berries then returning to the other side of the road to eat them in the first tree.
'Go ask them what they are.' I suggested (although I must admit that sounds more like an order).
Graham returns, 'Waxwings.' he says
By the time we had shopped in Aldi, and then Sainsbury, the pavements lining the street were becoming packed with a whole irritation of bird-watchers. Who were definitely twitching.

There is an online entry which says - although it may be just a suggestion - that the collective noun for a group of birdwatchers is a convulsion.

Waxwings are apparently not a native bird, but a winter visitor from the continent. And a group of waxwings is called an irruption.
This picture comes from the RSPB website 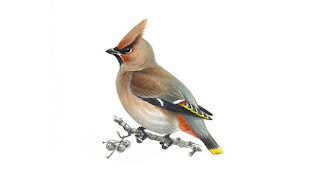 Posted by Christine Sempers at 04:03