I never thought that crochet would be such an addictive hobby!
Mind you, I had no idea how creative it was either. I had only ever come across the old fashioned blankets where you just go round and round and round.
My current passion is for crocheted squares and there seems to be an infinite variety of different designs for this. We had a blanket we had bought at a bootsale, which had been hand knitted from all sorts of left over wool, so I decided to pull it down into its constituent parts.
Now that was fun for a start! Although I found that the lady who had made it had literally used any kind of wool, in all sorts of different thicknesses. But never mind, it is now balls of wool, ready for more crocheting!
The main problem with the wool was that the colours were largely pale, and a lot of white - not a good colour when muddy footed dogs are likely to leap up and say 'Hello!' However Graham also recently presented me with a bag of  mixed balls of brighter coloured wool he had found in a charity shop, so these would help make the new blanket I intended creating, a bit more interesting.
One of the things I like about crocheted squares is that they do not take long to make!
Which is a good thing when I had reckoned that to make a 6ft by 7ft double bed sized blanket, from 6" squares, I was going to need 156 of them.
I started off with a very simple pattern for a solid square of double crochet, the only variety in these being changes of colour to create bands within the squares. All of these have an outer edge row of a light purply colour, and I tried also to use similar colours for the internal bits, to give them some harmony but difference at the same time. 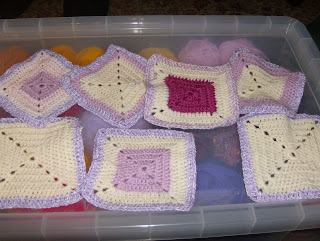 When I'd made twenty or more of those, I was starting to get bored. So I decided to make some slightly more complicated squares which have a circular centre, and then turn into squares. So I made four sets of four, all of which have a slightly brighter coloured solid circle at the centre. 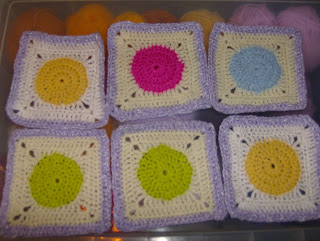 After that I felt that I was ready to tackle a more complicated pattern.
I wanted to have a larger square at the middle of the blanket, which I could then surround with the smaller squares, and I found a fab pattern on the internet which looks like a square within a square and has a large twelve petalled flower at the centre (the Charlotte Square from Look At What I Made by Dedri Uys). I think this is the most complicated pattern I have tried so far, but I took my time and tried to follow the instructions closely. Which I am not very good at. I particularly rarely count the number of stitches in each row, to check that I have got the right number.
Soooooo I thought when it came to the part where you change the pattern from a circle into a square, I had better just count the number of stitches in the circle, to be sure that I ended up with a square with equal sides and not some weird shape with one very long side. There should be 120 stitches in this round.
When I counted the stitches I had, there were 132.
132!
It was at that point I decided to count the number of petals in the central flower. It should have twelve petals. Somehow I had managed to create a thirteen petalled flower!
So now I had a few options:
Leave the thing as a circle and find something to do with it later
Pull the pattern back to where I went wrong and have another go
Try and get back to the original pattern by losing twelve stitches as I turned it into a square.
Option three it is then!
Actually that turned out not too bad as I could lose two at each corner and one in the middle of each side without it being noticeable. 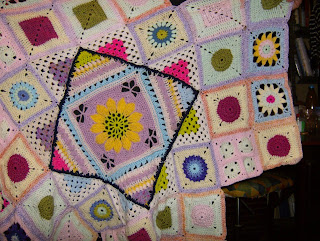 My lovely assistant has helped me with the display of the blanket so far. 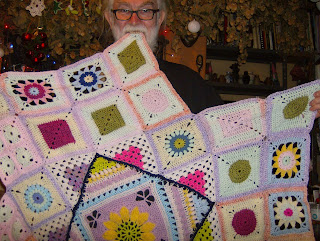 Graham said he had always wanted to be a model, he just hadn't thought it would involve crochet.
I told him he was in good company as Roger Moore (007) started off modelling knitwear.


Posted by Christine Sempers at 02:19