One thing about the lockdown is that it has meant that we have had to find different ways to entertain ourselves other than going out.
Apparently Netflix has had a huge upsurge in subscribers.
As for me, I have been working on another large crochet project.
Cherise, my daughter-in-law sent me a link to Cypress Textiles where they had a pattern for a blanket made up of plain and rose hexagons The Happy Little Tree Crochet Blanket - sorry I've forgotten how to copy the link and insert it, but if you type that into google you should be able to find it.
The pattern is made into an oblong blanket, but I decided I was fed up with squares and oblongs and decided to make a more organic pattern made up of circles of hexagon shapes.
I had a number of balls of variagated wool, not sure of the correct term, but it is wool that changes colour as you crochet or knit it up, and I'd been looking for a pattern that would suit it for some time. I decided that the 'Rose Hexagons' would be ideal, as flowers are often variagated.
I had several different colour ways of wool, so decided for a start to make up a circle using just one variation on the colour way. I wanted quite a regular pattern, with a plain hexagon at the centre, surrounded by a ring of rose hexagons, which would be surrounded by an outer ring of plain hexagons again. To me this looked like a series of circular flower beds with walk ways in between.
Some of the wool was variagated blue, which to me represents water, so some of the flower beds are (to me) pools, with floating flowers in them.
To be honest although I loved the rose hexagons, I found the pattern for the plain hexagon much more difficult to follow, for some reason. So I decided to make my own version which I found simpler and easier to do. I'll put it at the bottom so you can have a go if you like.
This bedspread? turned out to be rather like a repeating fractal pattern: the centre is a pale blue (water) hexagon, surrounded by six Rose Hexagons, which are surrounded by twelve more plain hexagons. This group/pattern  of 19 hexagons was replicated a total of nineteen times. So that the central group was surrounded by a ring of six more groups, which were in turn surrounded by another ring of twelve more groups.
I liked both the repetitions, and the variations within those repetitions. The central blue pool is echoed by three groups around the edge which are blue pools with floating flowers.
When I had finally finished and got everything sewn together, I decided I needed some sort of edging to the whole thing. I first tried using the light blue which I had used to create the 'pool' groups, but it didn't look right. Then Graham suggested I use a dark colour instead, so I went for a deep navy blue.
Unfortunately the fringing pattern I went for, takes quite a bit of wool, and I ran out. I wondered whether to pull the whole thing back and just try and find some wool I had lots of. Then I decided instead to make a feature of the changes of colour in the fringing and also to make the lengths of the different colours a bit random. I went for colours that echoed those used in the main body of the work, but were solid and often deeper shades and I am really chuffed with the result. 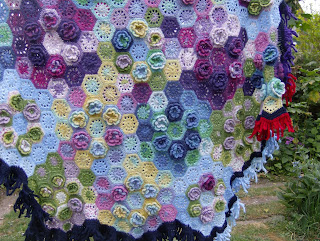 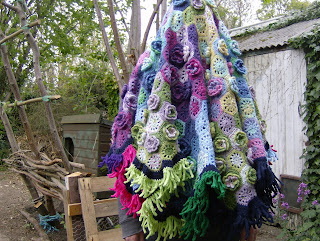 The bottom picture is Graham doing an imitation of a jellyfish while draped in the bedspread (?)

As promised here is my crochet pattern for the Plain Hexagon I used above
It is in US crochet terms as I find those easier to remember.
Chain 4 and slip stitch to make a ring.
Round 1: chain 3 then 11 dc into the ring, ss to close
Round 2: chain 4 (which = dc + ch), dc+ch 11 more times working into the tops of the stitches of Round 1 - go through both top loops of each stitch
Round 3: this turns the circle into a hexagon and you will work into the ch1 space of the previous row. ss into the next ch1 space, ch2 + 1sc in the same space, next space sc x 2, ch1, sc x 2 (this gives you a corner) so you will alternate between these two stitch patterns, next space will be 2 x sc, and the space after will be another corner, sc x 2, ch 1, sc x 2, continue around making 6 corners and ss to finish.
And that is a plain hexagon

And just in case you are interested, I had to make 114 rose hexagons and 247 plain to make the above bedspread (?). If I'd thought about that before hand, I would never have got it done, so I concentrated on working on a circle of 19 at a time.


Posted by Christine Sempers at 05:27