So, last time I told you that I am now the proud possessor of quite a few large balls of brightly coloured wool* So what was I going to do with it? 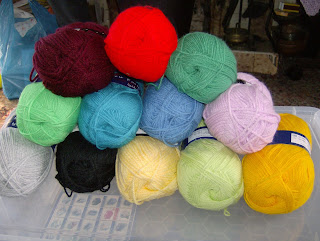 I wanted to make something big, bold, bright and colourful.
And the obvious choice was - a bedspread!
So far, so yawn.
I could make squares, triangles and circles - with exciting forays into wonky hexagons and an experimental oblong. So my first thought was a bedspread made of random squares and triangles.
Then I realised that when you looked down on this patchwork of squares and triangles it was like looking down on a patchwork of fields.
Suddenly the bedspread became a landscape!
The joins between the fields were obviously walls and hedges. And if this was a landscape, then it could be an island surrounded by the sea, with shades of blue squares around the edges.
And in the fields could be flowers and trees.
Then I took another leap into the world of magic and realised that as I was crocheting, I could be working magic into the bedspread too. So that when finished the bedspread would not only be (hopefully) beautiful, but also a magical object which could help you with magical dreaming, spell work and astral travel.
I wanted this bedspread to have many layers.
Layers of crochet, crochet on crochet, but also layers of meaning, symbolism and use.
It would be a warm and practical (ish) bed cover, but then you could enter into its magical landscape. You could explore the scenery, visit a particular place, swim in the sea. Maybe meet creatures who inhabit the landscape. The bedspread was going to have to have secret pockets in it with hidden objects or creatures.
Suddenly it had become a wonderful and exciting Project, full of amazing possibilities. It could be as interesting and elaborate as my skills would allow.
I wanted things not to be in proportion or scale. so you might have a field with huge flowers or trees. Some things would be flat, others three dimensional.
So for a person who up to this point could only crochet circles, triangles and squares, this was going to be quite an undertaking.
But one I couldn't wait to get started on. 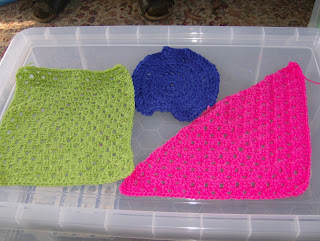 * I know technically these should be referred to as 'yarn' as this covers all forms of fibre used in creating these balls of thread whether it be wool, polyester, viscose or whatever. But in the UK these are always called balls of wool, because wool was the stuff we used for thousands of years. So rather than putting wool (yarn) I shall just use whichever term appeals to me at the time, and I'm afraid you, dear reader, will have to make your own mental arrangements.


Posted by Christine Sempers at 02:15