Ok, so once you have a few basic stitches and shapes you are ok with, you can start to make other things.
For a start the Basic Five Petal Flower pattern lends itself to several variations. Put two together on top of one another and you have a more 3d, ten petalled flower, or make a bright red four petalled version, give it a black middle and you have a lovely field poppy. 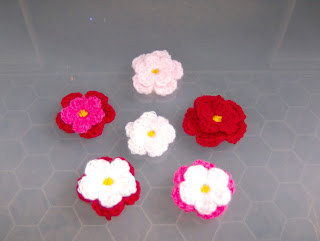 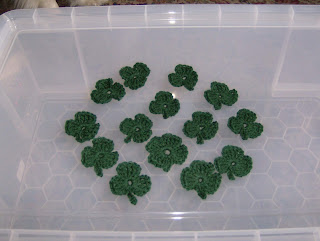 I liked the leaves. So I decided to try and make some more different shaped ones.
Back to the internet and the wide world of simple crocheting tutorial videos!
I found a lovely simple leaf https://www.youtube.com/watch?v=mfpPjetFIyE  Made one, liked it, made lots more in shades of green. Then suddenly realised that I could also make them in Autumnal shades which meant I could make even more in lots of bright colours.
Also I realised that if I added a little chain stitched 'stem' to the leaf, I could keep crocheting and add another leaf at the end of the 'stem'. Then I could join more and more and make a long stem of leaves - I did get a bit carried away. 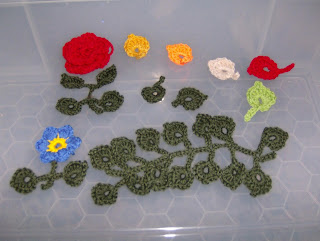 Meanwhile I was also having a go at making some trees.
These were all simply improvised, trying my hand at various shapes, and some were devised to make use of a particular ball of wool I happened to have. 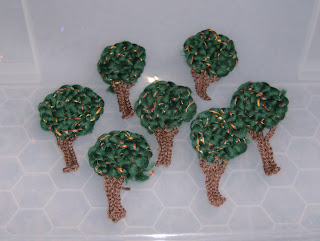 These stylised 'lolipop' trees were created because I have some beautiful rich green wool, but it is very thick. It reminds me of the rich green used in medieval clothes or Pre-Raphaelite paintings, so I had to find a way of incorporating some of it.
Meanwhile I had come across 'scumble' crocheting which is another or alternate name for freeform crocheting. You make various decorative elements or motifs, then work these together into a larger piece.
I had no idea what I was doing, but I fiddled about crochetting a bubbly green piece and realised it could be a bush, or the top of a tree. So the first piece became an oak tree (well that's what I think it looks like). 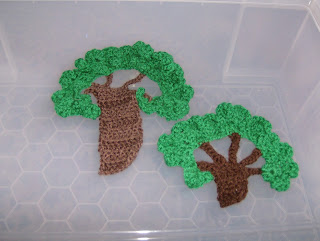 I may make some longer thinner pieces for some of the wilder 'hedge rows' but I haven't decided yet.
There is so much I want to try and so much I want to incorporate, you may need a crane to lift the finished bedspread!


Posted by Christine Sempers at 00:22